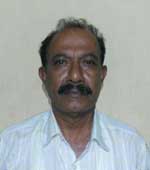 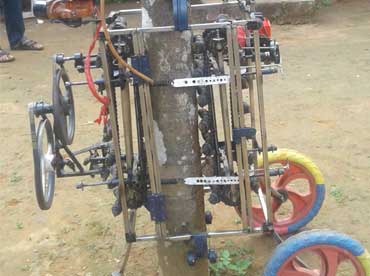 As he did not have any agricultural land, Ganesh started servicing televisions. But unfortunately due to some problem in his eyes, he had to discontinue this. Hence for the last six years, he has been engaged in servicing and installation of solar power equipment. In his free time, he helps children in the preparation of their science projects.

Genesis
The labour charges for spraying pesticide in areca-nut crop is Rs. 1000 to 1200 per 200 liters of spray. Seeing his interest in developing science based projects, a few farmer friends approached him and discussed their areca-nut spraying problem and requested to develop a solution. After some detailed discussion with his friends and assessing their requirements, he could come up with a prototype that addressed most of their needs.

The robotic sprayer
It is an engine operated robotic climber using chain with rubber grippers (like caterpillar legs), which can climb up to height of 50-70 feet and spray pesticide while climbing up an arecanut tree. The device runs on a 54cc petrol engine and along with the spraying attachment can climb up to 60 feet in approximate 7 min including setting up time of the device. The spraying attachment consists of pump and nozzle with pipe used to spray liquid pesticide on areca-nut tree. This device can be controlled through remote within a radius of 200m and needs two persons for installation.

A functional prototype has been developed at a cost about Rs. 60,000. However the device is under development stage. The device, which has been converted from an electric model to petrol engine operated model, is being used by many local people. It has great potential in areas where areca-nut, coconut and palm are major growing trees. The machine will not only reduce the dependence on labours/workers but also prevent accidents. It can be used for applying pesticides, growth promoters and sometimes also used for applying water for short relief of plants in areca-nut plantation as well as coconut plantation.