Price :   Rs.700/- for attachment (without Cooker) (Ex-factory price + packaging). The price does not include transportation costs, taxes, etc. 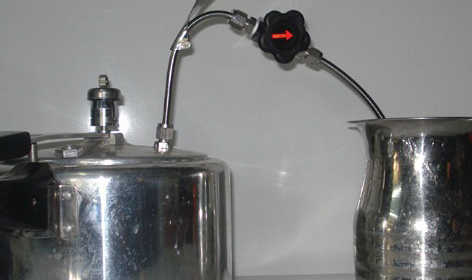 Conventionally, the pressure cookers have been used for making food only. However, Rozadeen (46) has modified the ordinary cooker to convert it into an espresso/cappuccino coffee making machine. The modified cooker is used to boil water and generate steam. Through a long delivery pipe having a regulator, high pressure steam is used to make frothy, tasty coffee.

Rozadeen alias J P Ustad was born in Motihari, Champaran in 1963. Champaran has a special place in the history of the country because Gandhi perfected the instrument of Satyagrah here in 1917 after lessening the exploitation of indigo farmers within six months. This experience eventually led to the call for full freedom in 1929.

Whenever Rozadeen used to go to marriage parties, he used to observe people thronging at the coffee stall. He reflected and realised that not many actually drink coffee otherwise in their daily lives and have tea instead. Also coffee is not an available option at all places and most tea stall owners cater tea only. Exceeding Rs. 5000, the electric coffee making machines were costly and out of reach for most road side vendors. He thought if he could make a device at low-cost, it may help him augment his finances and supplement the income of tea vendors also. He conceived this idea in 1993 and thought about it for a while as it involved some investment. He took some time gathering information about the coffee making process so that errors could be minimised. His income was already insufficient and an investment of a few hundred rupees without the guarantee of success was a risky proposition. However, he went ahead and slowly over a period of a few months and investing some three thousand rupees then, he finally made a prototype using an old cooker and tubes of copper. For this he had to take a loan of Rs 2000 from one of his friend, which he repaid later.

The innovation is a pressure cooker modified to incorporate a copper delivery pipe on its lid to transfer the steam generated inside to a container outside.

Fabricated from locally available material, this coffee cooker consists of an ordinary pressure cooker fitted with a copper pipe, a pressure releasing valve actuated by moving a lever (screw driver originally used). The copper pipe along with valve has been fitted on the top of lid by gas welding.

Water is heated in the cooker. Once sufficient steam pressure is reached, it is released by moving the lever upwards. The delivery tip of the copper pipe has been constricted to create more pressure at the point of release of steam. The safety valve below the handle and the whistle has not been touched. Rozadeen has named it as ‘JP Ustad coffee cooker’.

The cost of coffee cooker depends upon its size. A new 10 litre capacity cooker costs Rs. 2000 while a modified old one costs Rs. 750. Similarly a new 5 litre cooker costs Rs 1000 and an old one Rs. 500. If someone brings his own cooker, he does the modifications in only Rs. 250. This modification can be done in any size of pressure cooker. There are other coffee makers available[i] but in this case the novelty lies in generating the steam in pressure cooker and directing it through a delivery pipe into a jug containing coffee powder, milk and sugar. NIF has filed a patent in his name for the coffee cooker.

Taking 50 per cent advance Rozadeen only prepares coffee cookers on demand. He has sold over 1500 such coffee cookers in Motihari and other areas namely Bagaha (Indo Nepal border), Dhaka, Bairgania (Sitamarhi district), Raxaul, Bettiah, Sugauli, Samastipur and many other places. The demand is highest during the winter season.

This low-cost coffee cooker has good potential in road side hotels, tea stalls, small dhabas and other places where as choice coffee can be offered along with tea. It can even be used at homes for preparing coffee. One just has to change the lid of the cooker and the pressure cooker gets converted into coffee cooker.

This coffee cooker is common sight at any tea stall in Motihari. Feedback was collected from many tea stall owners who had been using this cooker for years. Most of them said that it has increased their clientele by drawing in the people who prefer coffee over tea. The cooker is economical and affordable. The coffee cup is sold for Rs 6-10 depending upon the size of the cup. The taste of the coffee is also different than that from an electric espresso machine. It feels and tastes soft and frothy more like a cappuccino than an espresso.

Rozadeen is looking for support to scale up his innovation. Presently he is making the cooker on demand only. He wishes to have some support so that he has make and keep 5-10 pieces ready for customers as many of them come from different districts also. He was felicitated during the 22nd Shodh Yatra in Bihar in 2008-09. A story on his innovation was done by a prominent newspaper, Dainik Jagaran in November 2008 and also by ETV channel during the Shodh Yatra. “Paisa hoi tabhina dimaag badhi” quipped Rozadeen when asked about any other idea.

Prior art discloses a kitchen appliance to brew coffee without having to boil water in a separate container is well known concept (http://en.wikipedia.org/wiki/Coffeemaker). It also discloses steam-driven, piston-driven and pump-driven espresso machines (www. http:/en.wilkipedia.org/wilki/Espresso_machine). The first one uses steam pressure while the other one uses pressurized hot water for brewing coffee. In the South Indian method of making coffee (http://vegeyum.wordpress.com/2008/05/09/tt11/) hot water is dripped very slowly through the coffee, milk is separately boiled, sugar is added, both coffee concentrate and milk are hand mixed using two mugs by pouring from one mug to other many times.

Coffee is not an available option at majority of the places and most roadside tea stall vendors provide tea only. The electric coffee-making machines are very costly (more than Rs.5000 each) and out of reach for most roadside.

The innovator has modified the normal pressure cooker and made it into a coffee-maker. A simple attachment of a metal pipe along with pressure-releasing valve has been provided in the cooker lid. Cooker with water is heated over a stove. Once steam is formed, it is released through the metal pipe and collected in a jar containing a mixture of coffee powder, milk and sugar. After allowing sufficient steam into the jar, in a few minutes, frothy and tasty coffee is ready.

Innovator has been awarded in Fifth Biennial Award Function from National Innovation Foundation and also supported under MVIF scheme of NIF. Over hundred users (Tea Vendors and individuals) have confirmed its operational practicability. The innovator has