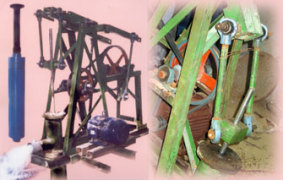 Manubha Vaduji Jadeja (41), known by the nickname of Budhubha, hails from a farmer’s family of Mundra Taluka of Kutchh district, Gujarat. Manubha has also served as the Vice Sarpanch (deputy head) of the gram panchayat (village council) for about a year and a half. Manubha’s family consists of his wife and two sons.