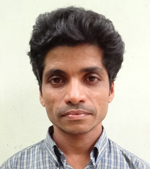 A lot of accidents happen due to accidental exposure to high voltage/ electricity. To prevent such mishaps, Rishikesh (40) has developed a device capable of sensing an electric current of 11 kV from a distance of 11m. This device, which eliminates the need of climbing on electric poles, can also sense electric current in transformer and concealed wiring.

Background
Rishikesh was born in a farming family in a region famous for its back waters. His father was also a fisherman and later worked for State Water Transport Department as well. His mother is a homemaker while his sister also works in State Water Transport Department. During his high school days, he used to see his classmates playing radio/transistors. He used to wonder from where the voice was coming from and how? At home, he meddled with the transistor radio, which upset his mother as it was the only means of entertainment for the entire family. Once in school, he tried to tap a telephone line, by connecting to a speaker. While he was holding the wire, the phone rang, giving him an electric shock. Laughing at this silly incident, he says that was how he became hands on. Having a curious nature, he started casually reading electronic books, which went on to become a hobby and then a passion. A number of people also helped and guided him from time to time, which helped him understand the subject.

He opted for science stream in his pre-degree course but realized that electronics was only a chapter in Physics and started skipping his classes to attend degree classes in electronics. But this did not last long and left studies altogether to start his work of repairing electronic devices. He worked on electronic chokes, fused tubes, lighting circuits and services induction cookers and security systems but the desire to do something different was on his mind always.

The sudden demise of his friend who was a line man in state electricity board due to electric shock while working on 220V line (power which surged through 11kv feeder line), left him at aghast. It was then he thought of making a device, which could prevent such incidents in the future.

Conventionally, small testers are used for detecting electric current with direct human body contact. Rishikesh has come up with a handheld electricity sensing device, which is compact, portable and light in weight. This device is wireless and can sense electric current upto 11 KV from 11 meters away from ground. It can check electric current in transformers and concealed wires too.The device has been tested and certified by Kerala State Electricity Board.

He has been a crusader for the ‘Save Energy Campaign’ in his area. As a result of this campaign, a village, Muhamma, could boast of having received electricity 24 hours during a period when load shredding exercise was going on in entire Kerala. This was possible only because the villagers had been trained to use electricity judiciously. He organizes small camps on energy conservation practices and conducts voluntary classes for police cadets, school children, and SHGs. He also participates in anti-drug campaigns. He is a good singer and likes to sing song when he is free. Rishikesh is currently developing a device, which will stop electric supply when a line would accidently be snapped.