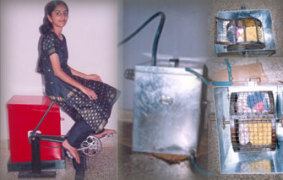 Remya Jose hails from Kizhattoor Panchayat in Malappuram district, Kerala. Her father is a high school teacher and her mother is the headmistress of an Upper primary school. She is 16 years old and has completed her 12th standard in the science group. Throughout her school years, a class topper, Remya scored above 90% in her board exams, this in spite of having to do the laundry. She represented her school at various science fairs and won prizes for making a still model of a transmission tower for mobile phones and for a working model of an indigenous casserole which conserves heat, thus also functioning as a thermal cooker. For her 12th standard practical examinations, she made a model of a refrigerator in which vegetables, fruits etc. would remain fresh up to a week

Miss Jose made this washing machine, after her board exams, when she was 14 years old. Her dream is to become a doctor and to do research in medicine. Hence, anything else cannot distract her. She is enrolled for coaching classes at a prestigious coaching centre in Thrissur - two and a half hours from home. She is staying away from home for the first time. “Whatever you have in mind, try it. Don’t worry about making mistakes, they can surely be corrected.”

It all happened because Remya’s mother fell ill during her 10th standard exams and her father was undergoing cancer treatment. She had to change three buses while going to and coming from school and spend about two hours each way. As there was no washing machine at home, the chore of doing the laundry fell to her and her twin sister. So instead of just wishing futilely for a washing machine, she decided to try her hand at making one during the vacations. She had watched the functioning of an electric washing machine and thought of substituting the electrical power with mechanical power. She drew the basic diagram and her father took it to a nearby automobile workshop. He requested the workers to make it, when they had a free hour and agreed to pay. He then purchased the materials according to his daughter’s instructions and supplied them to the shop. Once she had to explain to the mechanic personally how she wanted it to be done.
The mind being familiar with the conventional washing machine, this innovation comes across as surprisingly simple. It consists of an aluminium cabin in which there is a horizontal cylinder made of iron net wire. The cylinder is connected to a pedalling system which consists of a cycle chain, pedals and a seat. In appearance it looks like an exercycle - usually seen in a gymnasium - which is connected to a cabin. Clothes are put in the cylinder, the cabin is filled with water to the level of the clothes, washing powder is added and left to soak for at least 10 minutes. Then pedal for three to four minutes. The cylinder rotates at a very high speed with the clothes inside, cleaning them thoroughly. Soap water drains out, the barrel is refilled and the process repeated. By pedalling, the washed clothes are centrifuged and become about 80% dry. NIF has filed the patent for the machine and the patent number is 643/CHE/2003, 07.08.03.
Advantages
There are advantages galore. In the rural area electricity is always a scarcity and with revision of rates, the common man cannot afford to use a washing machine if in the first place he could buy one. In an electric washing machine if there is a break in supply - one has to repeat the entire process - but no such limitations for Ms. Jose’s innovation. The manual one saves time too. By attaching a cycle-like device to it, it can be used as an exercise machine thereby serving the twin purposes of keeping fit as well as doing the laundry. It is quite cheap as costs would be limited to about Rs.2000. An added bonus- it is portable. So the innovation is highly practical for use in the rural areas and stays within the budget of the common man.
On asking her whether she would like to pursue this innovation further, she said that she would prefer not to. At the same time she remarks that changes are necessary and improvements are possible and that personally she would not mind others improving it as ultimately it will all contribute to its utility.
Her inspiration
Her inspiration and constant supporter has been her father, a high school Hindi teacher – but her father confesses that when she first approached him with the idea of a manual washing machine, he expressed his doubts about it. He even told her that girls get married and go to a new house where there might be no washing machine, so it is better to learn to wash clothes by hand. Her mother recalls that she was never keen on he daughter ‘wasting’ her time on any of these pursuits and used to tell her to concentrate on her studies. Now she affectionately commends her daughter’s achievements and gives all due credit to her husband. Remya’s twin sister, Soumya, helps in her endeavours and is very proud of her. Remya also used to discuss her innovation with friends. They admit that at first they were sceptical, but her conviction and persistence convinced them that she would achieve it.
Pride of her community
Remya and her innovation are well-known in her area. Friends and neighbours have been full of appreciation for this ‘little scientist’ amongst them. Interviews with her demonstrating her washing machine have come in two regional newspapers – Madhayamam and Malayala Manorama. The Church organised a ceremony felicitating her, at which the Bishop presented her with a trophy. A lot of people have shown interest in the innovation including a couple of media channels requesting to do a feature on it and an engineer from Delhi offering to help in improving it.