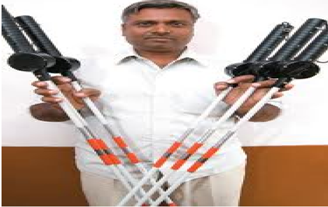 Wazeer (52) has developed a walking stick with audio alarm to assist visually challenged persons. There has been good demand of his sticks due to their functionality and low cost, in India and abroad.

Son of a poor farmer, Wazeer had to discontinue studies early to support his family. He started his career as a bore well mechanic and then moved to electronics repair and opened a shop ‘Waz technology’. One day while working in his shop, on the opposite side of the road, he saw a blind man slip and fall down in a slushy pothole. As he was quite far, he could not help him, which made him feel bad. He thought of doing something so that such an incident may be prevented. Using his electronics knowledge, he thought of developing a stick, which would assist a blind person and facilitate his movement.

He then started working on this stick and gradually developed three variants of the same namely talking folding stick, sensor based folding automatic sticks and double sensor based talking folding stick. These sticks, operating on chargeable batteries, have a voice recorded system, which gives alerts to the user about an obstruction ahead or water.  As soon as the sensor detects water, the signal gets transmitted to the controller, which actuates the audio alert. In crowded places, the user can give a voice alert “Excuse Me Side Please” just by the simple press of a button. Having an inbuilt sensor system and alert facility, this walking stick reduces the chances of accidents of the visually challenged to a considerable degree.

The device was tested with the help of Blind Men’s Association, Ahmedabad and feedback of about fifteen visually challenged persons recorded. The users appreciated the voice alert facility and also suggested to have a vibration mode for the same. Additionally, they requested incorporation of a proximity sensor.

Prior Art Search disclosed similar sticks but without multi functionality like this one offers and at a higher cost. NIF filed a patent (2244/CHE/2008) in Wazeer’s name. Earlier, NIF had awarded two students, Sanket and Prashant in its 3rd National Competition in 2005 for making proof of concept of a similar stick.

NIF also supported Wazeer under its Micro Venture Innovation Fund scheme for the commercialization of the sticks. The innovator has sold over 1000 pieces of different variants in India and many have been exported to other countries as well.  The distinguishing feature of his stick over others is the availability of three different variants each at a cost (Rs 900- Rs 2400) lesser than its market competition (> Rs 3500).

In India there are around 15 million visually-challenged people. They are constantly facing drudgeries because products available in the market are not tuned to their needs. Due to absence of sensor facilities; absence of multiple functionalities in a single machines, available product in the market did not cater the needs of visually-impaired people. Here, innovator came up with a product which can truly assist them in their daily chores. Precisely, neglected section can bank it on, as equal opportunity seeker tool to get them into workforce.

The stick consists of audio alarm to assist visually-impaired persons. The battery-powered stick alerts the user about an obstacle more than an inch high or depression greater than a foot within a diameter of one meter from the tip. With the help of moisture and depth sensors at its tip, this lightweight, 48-inch stick alerts users if they are stepping into water or into a pit, or if any vehicle is approaching.

Innovator has been awarded in the Sixth Biennial Award Function from National Innovation Foundation and supported under MVIF scheme of NIF. Innovator has sold about 8000 units in India and abroad in last 6 years.