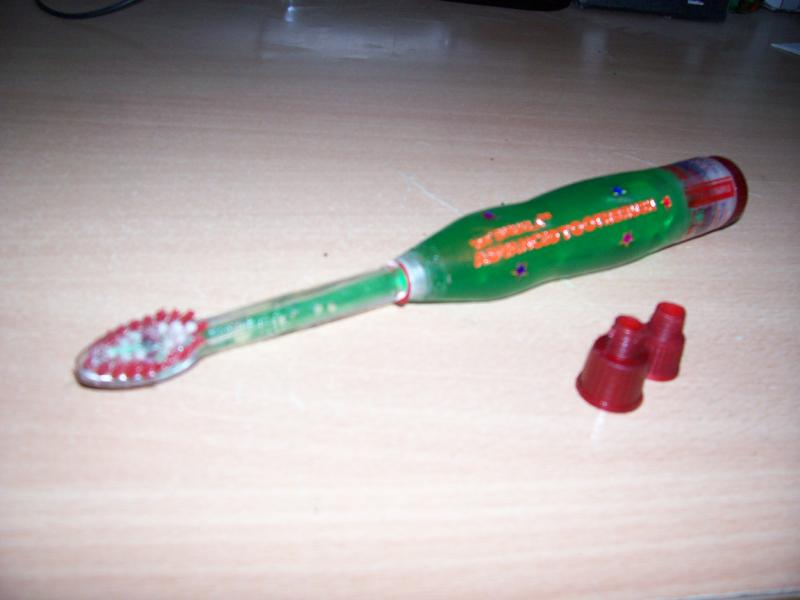 An innovator and an entrepreneur, Agastya Narayan Shukla (45) has developed a toothbrush with an integrated toothpaste dispensing mechanism. The toothpaste is filled in the body of the brush and need not be put separately.

Agastya was born on 15th August, 1970 to PrahladBhaktraj Shukla and Kamla Devi. His father owned a power loom unit at AnandParvat in Delhi. Unlike his three elder siblings, he used to assist his father at the factory when he was still a kid. Working with him and learning the nuances, his little eyes starting dreaming of running his own factory soon. The zeal to do something independently made him realize his dream when he was just 12. He set up his own small factory in partnership with one of his friend. While other children of his age were busy in learning books, or playing games, he was engrossed in his factory making spare parts.

He continued his schooling for two more years, though he preferred to spend his time in his factory rather than going school. Hence, he dropped out of the school at the age of 14 and completely devoted himself to the factoryand was getting a hands on experience. He continued to self-tutor himself by exploring relevant technical books and attending informative programmes. His father's work was also not going on smoothly for the past few years and there were certain financial crisis. He therefore did not mind young Agastya pursuing an alternate choice and trying to be independent.

Life changed for Agastya by the sudden demise of his father in 1988 and then he was left with huge debts.At that moment his elder brothers did not support financially. So, with no resources to repay, Agastya had to sell his factory to pay off the debts. With a small amount Rs 20,000 after clearing all the dues, fifteen years old Agastya decided to go to Mumbai to earn a living.

The bustling city of Mumbai welcomed him with its cutthroat competition and the sea of uncertainties. He got involved in various activities; from making documentaries to selling diamonds and doing odd jobs. After three years in Mumbai and one and a half years of hard life in Pune, he decided to come back to Delhi and there he started a new unit of wire knitting plant.

From here his professional life started gaining momentum and with that so did his personal life. He got married to Bharti on 16th June 1994.

The next few years passed peacefully. Business grew and they made a tidy profit. However, things changed in 2000, when tighter environmental laws closed down many small scale units that supplied raw materials and provided allied services. Taking a hit, his factory went into losses and had to be closed down. But unlike the previous occasion when he was alone to handle the atrocities of life, this time he had friends to help him financially and his wife to encourage him. With their support, he fought once again. One of his best friends, Ramandeep Gandhi helped him to set up a low-cost unit wherein he outsourced all his production thereby bringing down costs and risk. With his new business, he got ample time to think about various ideas and applications, which could become potential businesses.

The string of ideas

In 2001, he saw an advertisement in the Navbharat Times soliciting entries for the national innovation awards. His curious mind started to tick and he started sending his ideas. His ideas included a device for spreading perfume during public performances, harnessing the energy generated while exercising, audio controlling device, using the energy of vehicle exhaust to keep food warm in food-delivery vehicles and an air vehicle dashboard to indicate air pressure.

Next, he made and tested a prototype for a safety valve for kerosene stoves. This safety valve was built to prevent the exploding of stoves that killed or maimed a large number of users across the country.

He came out with an idea to prevent people from getting run over by trains while crossing the tracks. His solution consisted of mixing Mobil oil with black engine oil and ensuring that anyone jumping the tracks would brush the mesh of old ropes which would drop the dark liquid on them. Damage to clothes was to be the deterrent to those in a hurry to attempt crossing the tracks.

Having faced a lot of ups and downs in his life, today, he has become cautious with making long term plans. His focus is on living in the present moment and working hard on new ideas and business opportunities. He gives a lot of credit to his wife who has stood through thick and thin and supported his zeal for innovations.

The trigger of the idea

It was the year 2002. The telecom revolution had begun in India. Aditya Birla Group, Tata Group, AT&T, a merged conglomerate executed a major branding exercise to launch "IDEA" in the prestigious Delhi telecom circle. It was a launch that attracted millions of eyeballs across the nation. While passing on the road on his scooter, Agastya was struck by the message in the IDEA hoarding which read "An IDEA can change your life". He took the message very seriously as an inspiration and as a stimulus to come out of the rut he was in.

He started thinking about that one golden idea that would open the floodgates and enable him to move out of his labor intensive scale unit with wafer thin margins. His small scale unit with its irregular work orders kept tripping into losses every second quarter.

In June 2003, he was travelling in a train when he noticed people looking for toothbrush and toothpaste in their luggage. He thought why the brush can't be fitted to the toothpaste tube itself. On his return, he started thinking about one such product. He made a study of the design issues related to the bristles, contours and grip. Next he examined various material choices and developed the first prototype in December 2003 wherein he fitted a brush head to a syringe. Apprehensive of his innovation, he demonstrated it to his family and friends. But they encouraged him to go ahead with it.

He then showed it to a group of students and Honey Bee Network members whose encouragement boosted him further. Improving the design, he developed a toothbrush with the toothpaste tube integrated into the handle itself. He had to struggle hard to make the toothpaste retain its character and flow on demand though the holes near the tip of the bristles. Proper design of the front portion with hollow bristles became difficult as he was hampered by knowledge of proper injecting machines to be able to deliver it. Starting in 2003, it took him more than two years and 17-18 lakh rupees to fine tune the technology and develop commercial samples.

The toothbrush has an integrated arrangement for providing toothbrush and paste in a single assembly. The knob at the bottom of the tooth brush is twisted to push the paste up and out near the tip of the bristles.

The handle of the toothpaste has an inner cavity containing the toothpaste. Within the cavity, there is a reciprocating piston, which consists of a threaded rod running across the handle. When the rod is rotated anti-clockwise using a knob at the bottom, the paste is pushed forward into the bristle part of the toothpaste.

The bristles are a part of a separate detachable modular unit. The user can choose the hard, medium or soft variant and deploy as required. Any commercial toothpaste can be filled in the toothbrush. The entire unit and components can be cleaned to retain efficacy and maintain hygiene.

The toothbrush is made from a suitable food grade material. All the individual parts are replaceable, one can only change the part one wants to instead of changing the whole unit. The idea is to use the toothbrush for a long time and refill the paste when required.

Comparable toothbrushes are found in prior art, albeit with a modified configuration. But these instances differ in construction and design from the current innovation.