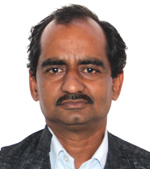 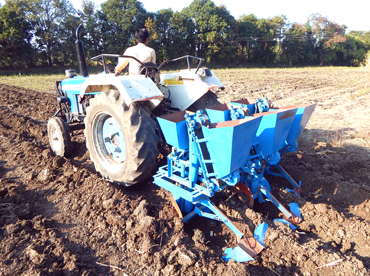 Sowing of sugarcane buds in field is laborious and time consuming. Not maintaining uniform distances between the buds and/or varying the depth while sowing manually, may result in less productivity. To address these problems, Roshan Lal (47), a prolific innovator from Mekh villager has developed a tractor operated sugarcane bud planter.

The son of a farmer, Roshan Lal has evolved into a master craftsman and skilled technician. He repairs farm implements and equipment, and develops innovative machineries at his workshop in his house. Apart from his craft, he shares a passion for painting. His family consists of his wife and four children, two daughters and two sons.

After completing his schooling, he took admission in a graduate course in the Government College at Narsinghpur. Being the only son and with three sisters to marry off, he had to drop out midway to help his father in the farm. The creative streak in him expressed itself at a young age. When he was fourteen, he developed a gun that could fire matchsticks and scare away the monkeys from the fields. Some of his friends bought a couple of these guns and used them. In 1988, he purchased a sprinkler irrigation system for his farm. One day, someone stole one of the nozzles from the sprinkler. He could notice the drop in pressure only after sometime. He began thinking of ways by which he could have detected the leakage and the consequent fall in pressure earlier. Materializing his thoughts, he developed a valve connected with two-way switch and fitted it in the delivery line. Any damage or loss of nozzle created a pressure drop in the line, and this in turn, triggered the two way switch to turn the signaling bulb on.

In the same year, he worked further on the idea and developed a light weight coupler. With his naiveté and ignorance about Intellectual Property Rights, he disclosed this idea to a reputed manufacturing company. The company adopted the design in their sprinkler system without giving him any credit or royalty.

The next year, he redesigned the wooden plough, which is subject to much wear and tear and developed a durable metal plough. In 1990, he started working on a thresher. He modified the stud type drum, used primarily for wheat and fitted a rasp-bar type attachment to handle gram, peanut, barley, soybean and pigeon pea. He added an aspirator to clean the grains, added an extra fan to separate the accumulated crop feed and extended the chute to make the feeding safe. In 1996-97, he developed an automatic starter with timer for irrigation pumps after spending close to four years and Rs. 30,000. The unit allows the farmer to use it on rural power grids, which suffer from erratic supply and unavailability of three phases.

2004 was a very productive year where he did a number of things. He developed a miniature pressing iron measuring 1” ×1.5”, which could be carried easily while traveling. Next, he extended the use of the sprinkler system and developed a fertilizer applicator, which could be coupled to the distribution line of the sprinkler. Fertilizer or pesticide could be mixed in the irrigation water by this attachment and dispersed in a standardized manner. The same year, he also developed an automatic temperature controller for the stationary engine, which cut the fuel supply after reaching 95°C temperature. He had been using it since then.

The next year, he started working on the problem of electrical theft. While people hooked up a line from existing consumers, the consumers were left with huge bills from unauthorized use and thefts. He developed a device with an overload detector, which could be fitted to the distributor controller on top of the electric pole. When someone tries to steal from that line, an indicator and alarm goes off and supply to all the users on that line is interrupted. This can be set right only by authenticated users on the grid.

In 2006, Roshan lal developed three machines for the sugarcane farms. These machines were the sugarcane leaf stripper, set cutter and the bud chipper. The leaf stripper removed the leaves so that the marauding insects cannot lay their eggs on the leaves. He improvised the machines a number of times to get the optimum cutting action, reduced the number of flaps, and introduced curved blades with serrated edges after collecting feedback from the users. The sugarcane bud-chipper is a device used to efficiently chip off a piece of the sugarcane node. For this device he received a consolation award in NIF’s Fifth National Awards in 2009. This technology has been taken up by Tata Agrico for marketing. Later in 2008, he developed a three-wheeler pesticide sprayer with a tank capacity of 60 liters and which can be pushed manually over the field. It covers more than one acre in an hour and is provided with 8 adjustable nozzles and has coverage of 4 meters.

While marketing and promoting the sugarcane bud chipper, Roshanlal realized that in sugarcane farming, many drudgery related issues have remained unaddressed. He observed that farmers prefer to plant sugarcane buds directly inthe field manually, which is a cumbersome and time consuming process. Once the problem got identified, he started working on the solution. Initially he developed a manually dragged planter with one particular type of metering mechanism. He tried it in his field and when he obtained successful results, he converted the manually dragged version to a tractor mounted planter.

This is a tractor mounted sugarcane planter with a unique metering mechanism for planting sugarcane buds directly into the field.

As per claims the field capacity of the machine is 0.5 acre/ hour. Using this planter the plantation cost is estimated to reduce to about Rs 800/acre from about Rs 6000/acre using labour. The plant to plant sowing distance can also be adjusted according to the requirements. It can also be used for simultaneous application of fertilizer, pesticides or herbicides in the field. For this purpose, the machine is equipped with a sprayer pump.