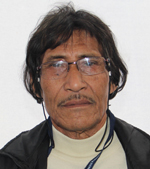 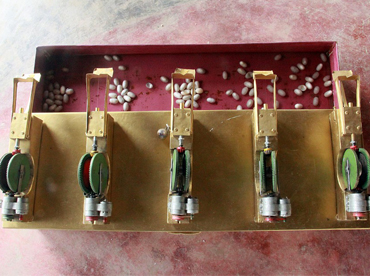 Manihar Sharma (65) is a mechanicand a serial innovator who has come up with a number of useful innovations like a handy incense stick making machine, an innovative dryer, automatic pump operation system for overhead tanks, etc. To simplify the tedious task of reeling silk traditionally, Manihar has come up with a solar operated machine, which can simultaneously perform reeling and spinning of different types of silk.

After working as an auto rickshaw driver, running a small restaurant, serving as an assistant to his doctor friend, Manihar Sharma has been a full time innovator for some time now. Economic hardship and lack of support did not deter or hamper his innate creativity. For his lack of practicality, the society and his own family mockingly brand him as “numikadoba” (the man who would go to the Sun).

Manihar’s aunt brought him up as he lost his mother when he was just eight years of age. After matriculation, he abandoned his studies because of financial problems and started working as a mechanic in a small local workshop. Giving shape to his imagination, he made toys and other small gadgets from the left over parts in the workshop. With his perseverance he soon mastered all the nuances of repair and maintenance of small light vehicles and other engines. His constant source of inspiration has been his late mechanic teacher, who used to repair or modify complicated machines without needing any sophisticated tools and equipment. The backbone of his innovative spirit has been the informal yet logical and practical mechanical tips shared by his mentor.

While he tinkered day and night, the availability of mechanical and electrical parts needed by him in the local market became a problem. They could only be brought in bulk, either from Kolkata or Guwahati. The inability to buy expensive parts from the markets outside the state, forced him to manufacture those plastic parts himself. So this frugal innovator enrolled for a three months course on plastic molding techniques at Central Institute of Plastic Engineering and Technology (CIPET), at the age of 50+. And he was the only trainee, among the hundreds, who actually made use of the technology. The obsession to do the things perfectly made him first practice the art of manual molding of plastic for years. His hard work and sheer perseverance makes even the CIPET send him job works sometimes.

Conventionally, in Imphal, mostly women are involved in silk reeling. Manihar realized how difficult it was for the women to judiciously balance the available time between household activities and silk reeling. His desire to help reduce the drudgery involved in the work, made him want to develop an automated silk reeling system, which did not require constant monitoring. This would help the women to simultaneously carry out their household work and silk reeling task with optimum output. Since all places in Manipur do not have access to electricity, he thought about using solar unit as source of energy. His machine is sosimple that an untrained person can operate it.

This is a portable user friendly machine, which can simultaneously carry out the reeling as well as spinning for different varieties of silk like Mulberry, Muga, Eri and Tasar without any arduous human effort.

The salient features of these machines are its compactness, easy portability and strong durability. The machine can use both solar energy and electricity. Solar energy makes it environmental friendly and appropriate for rural interiors where electricity is not available or is erratic. It performs effectively even in cloudy weather and at night through a DC battery, the use of which reduces the chances of accidents considerably. The machine can be operated twenty four hours thereby increasing productivity. Compared to the existing local or traditional methods of reeling this machine produces superior quality of threads in less time and with reduced labor. The machine is ideal for women who strive to manage household activities along with silk reeling process.

Manihar is not touched by complacency and drudgery. He does not let his mind and hands rest until he has developed every part of different innovative machines to a finish to his choice. His three main innovations viz. automatic pump operator, innovative dryer and incense stick making machine have been much appreciated. His first innovation an automatic pump operator could minimize the wastage of water and human power. It facilitated a hassle-free household water management. He won a National Award in 2009 for the same at the hands of the then President Smt. Pratibha Devisingh Patil in National Innovation Foundation – India’s 5th National Award Function.

Manihar’s wife, who was previously extremely apprehensive of his innovative bend of mind, today appreciates and supports his innovations whole heartedly. All her complaints vanished after Manihar Sharma developed an incense stick making machine which reduced her workload and made highly improved quality of incense sticks with minimal wastage of bamboo. The couple has three daughters and a son. One of his daughters is differently abled. By preparing dhoopbatti, agarbatti, doing embroidery work and tailoring, his wife is the bread earner for the family. His innovations are just an erratic source of income.

Despite all difficulties, Manihar has been helping other innovators or those who need his mechanical help, without any qualms. He has aided his doctor friends by repairing their hospital equipment. He has also helped desperate individuals by making plastic spare parts which are not available in the market (such as photocopy machine gears, or wheels for gym equipment) thereby preventing their machines from becoming redundant. In his home-cum-makeshift workshop, if not engrossed in innovations, he is busy in the repairing work of local machines brought in by his neighbours, friends and relatives or fabrication of small plastic equipment. He has this exceptional inborn talent to identify the fault of the machine in just a look. This he considers a God-given gift and so he does not charge the people who come to him to get their gas stoves, radios, TV, lighter, torches, table clocks, umbrellas, etc., repaired, unless there is a component to be replaced.

In a place where kinship and personal relationships count more than anything else, his absence at social functions never calls for a reprimand. Initially, his neighbors considered him mad, but soon they realized his caliber and their perceptions changed when he had many government officials visiting him and he got some grant to work on his innovations.

Manihar has been single-mindedly pursuing his passion, which at many times, is quite inspiring for other people. His mind is continuously buzzing with new ideas and his eyes are always on the lookout for problems, which he can engage his mind with.