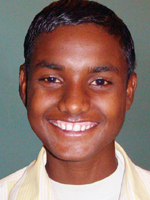 Sajid is a little boy blessed with the sensitive soul of a poet.  His compassion shines through in his poetry.  It also made him acutely aware of his mother’s drudgery as she went about her daily work in the house.  He got especially troubled each time he saw her hunched over a pile of rice, tediously picking out impurities. Rice was a staple food in their home, and cleaning it for a family of five was not easy.  Wanting to help out his mother, Sajid came up with a ‘Rice cleaner’ that automatically cleans rice before cooking.

Once he was inspired by the thought of reducing his mother’s pain, the next step was deciding what kind of machine could do this work.  Sajid had his eureka moment a few days later at a flour mill.  Fascinated, he observed as wheat grains fed from the top were ground into flour that accumulated at the bottom.  Watching this ‘atta chakki’, he visualized another machine where rice put in from the top comes out cleaned from the bottom!

“I was excited because I now knew what to do.  But I was not sure if I could make such a machine with my limited knowledge of science,” he shares. Money was also a problem.  Their only income came from his father’s mobile tailoring shop, which was essentially a sewing machine placed on a pushcart.  It was just enough to support a family that also included Sajid’s younger sister and an elder brother who was mentally challenged.

But these difficulties did not put him off.  Inexperienced but full of optimism, he set about making the rice cleaner.  To save costs, he picked up used parts from a neighbourhood scrap shop.

The biggest challenge was getting the correct motion for separating the impurities from the rice.  He chuckles as he recalls, “I first used four motors of 12 volts each and connected them directly to 220 volts.  But all the motors burnt out. I realized that they were too weak for the power supply.  So next time I used eight motors, reasoning that if four people cannot lift the weight, why not use eight!”  Of course, these also burnt until addition of a transformer finally got the system running.

Many changes and trials later, the rice grain cleaner was ready for testing. It was a working model that used electricity to separate physical impurities from rice.  It could clean up to three kilograms in an hour.  Presenting the machine to his mother was an emotional moment for him.  “My mother just could not believe it until she herself saw the machine working.  My family and neighbours knew I was trying something, but no one paid any attention till it was ready.  So everyone was excited to see it in action,” he mentions.

Around this time, Sajid came to know of IGNITE competition organized by NIF.  He entered and won an award for the rice grain cleaner.  At the award function, everyone was charmed with his poetic skills.

His love for poetry not only makes him a crowd-puller, but also helped him realize his dream of a good education.

Since childhood, Sajid wished to study in a good school.  But it was unaffordable.  So he studied in a school that did not charge fees till class 3, when he got a lucky break.  While performing at a state function, he recited an emotional poem on education.  It moved the Governor sufficiently to secure his admission in a well-known school in the area on full scholarship.  The poem went something like this:

He fondly recalls his first day at school saying that “the teacher took me from class to class, introducing me as a poet!”  Eventually, two other classmates joined him to make a close-knit circle of friends.  They share everything from their food to their thoughts.  On holidays, the trio can be seen zipping around town on a borrowed scooty.

Sajid spent five fun-filled years in the school when a new problem across. The family’s small shack in a slum colony was razed to the ground in an anti-encroachment drive.  They moved to stay with relatives in a village some 15 km away from his school.  Poor road connectivity meant that Sajid left home at 5 in the morning and returned only late in the evening.  His school had a hostel, but again, affordability was an issue.

Happily, Sajid again received help unexpectedly.  Representatives of a commercial organization read an online news story on IGNITE award winners, which included Sajid’s rice grain sorting machine and his background. They approached NIF with a request to meet him.  They were sufficiently impressed to offer to pay for the hostel, in addition to gifting him a computer.

Although staying in the hostel has made things easier for Sajid, he looks forward to coming home during holidays.  He loves the taste of his mother’s cooking, especially his favourite – cooked fish head in ‘dal’ accompanied with hot ‘rotis’.  Back home in the village, he loves playing ‘pitthu’, a local game.  “I love this game because I like hitting the other team with the ball,” he shares with a grin.

When not playing with friends, he loves to curl up with a book by Maithili Sharan Gupt, a celebrated Indian poet who is known for his inspirational poetry.  He has picked up from his favourite poet the ability to eloquently present one’s opinion through poetry.  This was evident during the 27th Shodh yatra at Ranchi in the summer of 2011.  Although one of the youngest participants in a group of at least 30 adults, he did not shy away from having his say, of course through poetry!

Sajid is proud that he has become a minor celebrity at school because of IGNITE.  Combining his interest in science with a love of poetry, he aspires to become a scientist like Dr Kalam because he “wants to find a solution to most problems and simplify things so that no individual faces any problems”.

His next project is a machine that will make easy the otherwise tedious manual process of sifting sand used in construction.  His father proudly says that his “nanha shayar” (little poet) has gone on to become a “baal vigyanik” (child scientist) and he feels confident that his son will go on to do much bigger things.  We agree!

Note: Sajid went on to win the State award in the 7th Biennial Awards for Grassroots Innovation and Outstanding Traditional Knowledge organised by NIF.  Honourable President Shri Pranab Mukherjee gave away the awards at a function held in Rashtrapati Bhavan on 7 March 2013.