Mohanlal observed the inconvenience of the local fishermen while fishing with boats using diesel engines or petrol-start kerosene run engines, with an inbuilt gearbox. The boats with diesel engine had a long tail propeller system without gearbox, which affected their maneuverability. The kerosene run engines consumed more fuel and pollute the water affecting the marine life adversely. Moreover, beach landing is very difficult using the conventional inboard marine diesel engines.

After rigorous research and development, Mohanlal developed a gearbox and manually tiltable Z-drive system for small capacity diesel engines to overcome the above problems.

Mohanlal (52) is an accomplished boat mechanic and technician with experience of over three decades in repairing marine engines and fabricating drives and assemblies used in fishing vessels.

From a young age, he developed his skills in repairing fishing vessels while working at his uncle’s workshop for five years. He then moved to Mumbai to work in a dye-making unit for a couple of years. After that, he spent nearly eight years working in the Gulf, at a Mazda car dealership center on an ad-hoc arrangement as a lathe operator and bits-and–pieces mechanic, before heading home to Kerala. In 1987, he started his own workshop “Kaveri Engineering works” in Alapuzha dealing with repairing of boats, drive and motor systems. He also started repairing the trolling boards, as one of the very few experienced technicians around, used in fishing vessels for opening and spreading of fish net under the sea.

During late 1990s, one boat owner approached him to make a new trolling board and gave him an advance of one thousand rupees. Though he protested, citing his lack of experience, the customer reposed his confidence in him and asked him to take the advance and build the new one. Feeling encouraged, he bought the raw materials and delivered the new board in five days flat.

This was a turning point for him as a designer and fabricator. His fame reached nearby villages and towns from where he received a large number of orders.  At that time, he employed up to eighteen workers in his workshop and developed and delivered more than 350 boards. At present, the innovator resides in Aleppey with his wife Sreedevi and their two children. The elder son is pursuing a bachelor’s degree in commerce and the younger son is in the third standard.

Having expanded his trolling board business, Mohanlal purchased a new boat with Yamaha engine for nearly thirty thousand rupees. This kerosene engine consumed thirty liters of kerosene everyday. Cost of one can of kerosene is sixty rupees with only a few liters of kerosene available at subsidized rates and the rest from the market at prevailing high costs. He observed the profit margin for two months and noticed that the profit was negligible due to the high operational cost of fuel.  He noticed that all the fishermen were experiencing this.  Thus, a large amount of fuel had to be carried aboard, also adding to the vessel loading. The exhaust after using this fuel pollutes the water, and affects the marine life adversely resulting in lower catch. After a few months, he decided to stop the business and started thinking of cheaper alternatives for kerosene-based engines.

The other alternative viz. diesel engines had poor maneuverability, with rudimentary gearbox options unable to handle various operational modes of the fishing vessel. For the engines used in local fishing vessels, the gearboxes fitted from the available market options were a mismatch. With the non-availability of a gearbox, the propeller of the boat was often directly coupled to the diesel engine, making vessel handling more difficult and dangerous.

The long tail propeller fitted with a diesel engine, without any gearbox, made by YANMAR at over seventy thousand rupees is costly, and weighs over two hundred and ten kilograms reducing its maneuverability.

Having assessed all possible alternatives, the innovator felt the need to develop dedicated gearboxes suitable for the fishing vessels and decided that on board Diesel engine is the only alternative.

In 2001, he started working on diesel engine. Initially, he thought, the entire work would be over in two weeks. He reduced the weight of the engine from 83 to 63 kg and further brought it below 30 kg by using aluminum alloys instead of steel components. Cost of mould and pattern for the castings and machining individual components drove up his development costs. Next, he focused on the boat performance and optimization and shortly achieved a speed of 18 km/ hour. He introduced the clutches and two gears- one each for forward and reverse operation and an exhaust pipe.

When the news of his innovation appeared in the newspapers, Mr. P.H Kurian, Director of Kerala State Industrial Corporation, invited him to explain the advantages of his innovation. Seeing the potential of the product for the state fisheries sector, the Kerala State Industrial Corporation extended a loan of three lakh rupees on a condition that, if the project became successful, he would pay the money back to department. He continued his experiments with more vigor.  Several field tests were completed and. problems were rectified. He participated in various boat shows exhibiting his innovation. All this helped him to improve upon his innovation.

Seeing the potential of his machine he got an unexpected order of a hundred engines from a reputed engine manufacturer, ELGI Equipments, of Coimbatore. ELGI needed gearbox and other accessories from Mohanlal for relief work in Tsunami affected area. The existing gearboxes marketed by ELGI made maneuvering engine difficult. At this critical moment, Mohanlal received the financial assistance from Dr. Binnoy who came forward and agreed for the necessary investment. But, due to lack of dedicated production setup, they were not able to deliver the order in time.

Meanwhile, ‘Matsyafed’, a society established by government of Kerala for the welfare of fishermen got interested in this gearbox. Since they spent a lot of money on kerosene subsidy, they realized the potential of this innovation vis-à-vis limitations of kerosene engines and were looking for cheaper alternatives. They decided to help in the field trials and marketing efforts. Since Mohanlal had submitted the entry to NIF, he received assistance for technical documentation, filing of patent and financial support for developing the prototype and liaison with Matsyafed for marketing.   NIF also funded a specially designed gear fabricated by  Lakhsmi Machine Works, .

The next round of tests revealed problems of propeller damage in beach landing and shallow water; Mohanlal developed a Z drive for solving these problems. The propeller system can be tilted to avoid touching on the beach while landing and can be lifted up by 90 degree during landing. In this project, with no other income except from his workshop, the innovator had to spend more than thirty lakh rupees and mortgage his house. He even had to sell all his ancestral land.

The gearbox has been developed for a 12HP diesel engine with 2400 RPM idling speed and around 12 liters fuel tank capacity. The diesel engine directly couples with two reduction gears through flange coupling with the engine flywheel. The innovativeness lies in the application of helical gears with inner spline cut with dual sided jaw and dog clutch. This provides smooth running and better power transmission for the marine diesel engines.

The Salient Features of the Z drive system to go along with the gearbox for diesel engines are that it is manually tiltable and can be locked at 90 degrees while landing. It also reduces loss of power through horizontal shaft power transmission and results in a smooth drive and better maneuverability.

This gearbox is a boon for fishermen who wish to switch from costlier, polluting kerosene based vessels to a robust, cheaper and maneuverable diesel powered vessel with a matching gearbox.

Using a diesel-powered engine with gearbox cuts down the fuel cost to one-third of it in petrol engines. Mohanlal’s innovation has several advantages. Apart from the large savings in running cost, it causes minimum pollution with a projected cost of less than sixty thousand rupees. There are more than 20,000 boats in Kerala alone who may benefit from this innovation.

With the assistance of NIF, the innovator has signed an agreement with MATSYAFED, the Kerala State Co-operative Federation for Fisheries Development Ltd., for commercialization of his innovation. MATSYAFED now plans to demonstrate the system at different ports and coastal areas in Kerala. This will give hands on experience of the new system to the fishermen. Nif has facilitated linkage of innovator with the South India Fisheries Federation (SIFF), for promotion of the technology. Good results are expected. 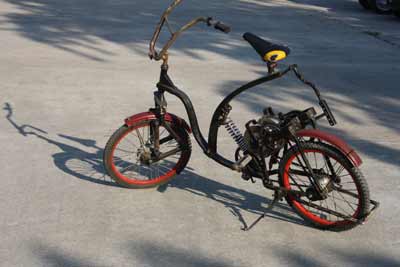