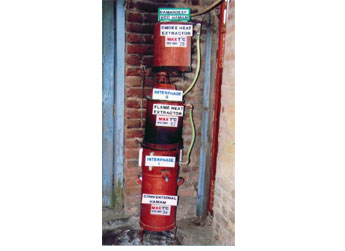 Durlabh Singh Puri (55) is a photographer and an innovator. He has modified a hamam (water heater) such that one can get warm water at different temperatures. Born to an engineer in Punjab Irrigation Department, Durlabh was an average student with an interest in science. While television and radio were his childhood fascination, he also had interest in electronics, gardening, photography, painting, listening ghazals and classical music. Since he had a good technical sense, his friends and even teachers used to take his help in case there was some problem in any instruments in the science laboratory. He had drug reaction when he was in class 10 due to which he developed some issues with his vision in his left eye and also had to be bedridden for a year. Thereafter, he joined ITI and started working in a repair shop. After a year, he started a workshop of his own. Meanwhile, he also developed interest in plants and environment and attached himself to various environmental initiatives. Due to a spondylitis attack he could not continue his workshop and took up photography, his childhood hobby as the profession. In his family, he has his wife who is a teacher and a son, who suffers with cerebral palsy.

Genesis of the innovation The innovator lives in a cold region where warm water is required for daily use. His family had a conventional hamam, or water-heater, which used wood as fuel. Watching smoke escape from the burning wood made him aware of heat wastage. His innovation came out of his experiments on the hamam to use this heat efficiently. He named the innovation after his son Raman Deep as Ramandeep Eco Hamam. The phrase “Eco” is used as the device is fuel efficient and produced less smoke. Conventional hamams get damaged very soon and a lot of energy gets wasted as well. Every year or two, either a new one has to be purchased or the top portion needs to be replaced. To address this problem, he modified the hamam by removing the top portion and using aluminum sheet instead of iron sheet. One day when hamam was being used, he forgot to remove a four litre water container he kept on its top. After half an hour while draining out hot water, he realised that he had got additional four litres of hot water without extra effort or cost. This triggered him to utilize the heat otherwise going waste. In his attempt, he removed the aluminum cover and placed a ten litre container of water directly on the top of hamam. But instead of heating the water, the fire got extinguished as the air flow got blocked. The hamam had to be lit again. A metal ring was kept on the hamam and sides were punched to ensure better air flow. But for refueling, still, the container on the top had to be removed, which was cumbersome. A window was then cut for refueling but that led to the escape of flames to the outside and loss of heat. Then instead of the window, a door was used, but then complete combustion was not taking place and a lot of smoke was being generated. He kept on addressing one issue after the other and modifying the hamam till he was satisfied with the output. The Raman Deep Eco Hamam (Water heater) The modified hamam consists of a conventional hamam and two heat exchangers. Water is filled in the tank through the inlet and wood is ignited. Similar to the conventional hamam, water is directly heated in the lower most chambers. The heat exchangers channelise heat generated through smoke and flames to further heat the water. Valves are present to allow water to pass from one chamber to another. When the water in the lower most chamber attains a temperature close to 100 degrees Celsius, it can be drained out separately. On being emptied, the lower chamber can be refilled with water from other chambers. As this water is preheated, it takes less time and fuel to reach 100 degrees Celsius. Alternatively, once water in the lower chamber reaches 100 degrees Celsius, it can be mixed so the overall temperature becomes around 55 degrees Celsius. The water from other chambers can also be separately drained out through separate outlets. Better fuel utilization reduces the money and/or labour involved in obtaining fuel wood. The hamam has been tested at CTAE, Udaipurm which has found its thermal efficiency to be 58% against 38.5% of conventional hamam. The CO/CO2 ratio was found 0.035 in modified hamam and 0.038 in conventional hamam which are within the safe limits. The concept of utilizing heat of smoke by using heat exchangers in the path of smoke or flumes is known in art (US Patent 4377200, 4397297, 4628869, 4137965, etc) however, the same is not available for domestic stoves. Accordingly, NIF filed a patent in the innovator’s name (1743/DEL/2011). He is awaiting the grant of the patent to start commercialization of the hamam. He takes time out from his photo studio to organize flower shows in town, particularly for school children and teachers. His technique of growing begonias on bricks has been tested and proved successful by ‘The Royal Horticulture Society’, UK, which also published his work in their publication Garden in 2000. He is a life time member of the society and was invited for the Chelsea flower show held at London during 23-26 May 2000. Also he was invited for the London Flower Show organized during June 20-21, 2000. In 2004, he also received National Integration Award for Environment Protection. He has also been interacting with schools, voluntary organizations, and government officials and sharing his work.