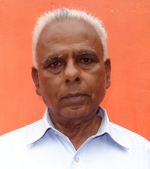 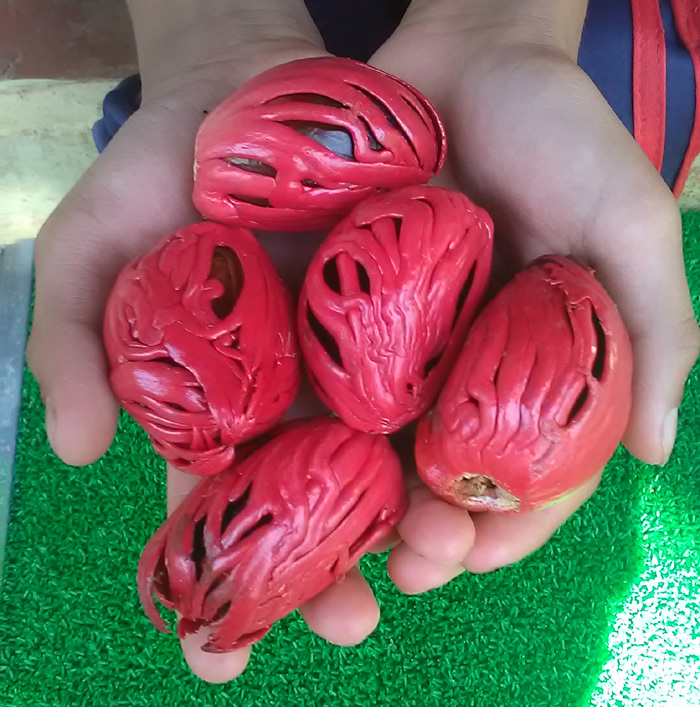 Varkey Thomman (76), a progressive farmer from Idukki district has developed an extra-large nutmeg variety called Punnathanam Jathy through selection from a local variety.

The youngest among seven siblings, Varkey grew up in an agricultural environment and studied till class seven in Kottayam district. Their family migrated to Idukki when he was about 14. The place they shifted to was a forest, with no roads, electricity or other basic facilities. Sometime in 1970s they got the legal rights to their lands by the government. Varkey had to start work at an early age, helping his father and other siblings. They cleared an area of forest for cultivation and started with banana, tapioca and (non-flooding) paddy cultivation. Couple of years later, they shifted from paddy to areca nut, coconut, black pepper etc. At that time, they were one of the first farmers cultivating the Karimunda variety of black pepper at a large scale (approximately 4000 plants). Nutmeg cultivation was started with some 4-5 saplings brought from their native place. Once the yield got better, more area was brought under nutmeg cultivation. Initially, kernels were used for propagation to selectively develop improved varieties of nutmeg. With some experience, Varkey became independent farmer about 1960, got married and settled. Other siblings also settled nearby.

About twenty years ago, Varkey Thomman developed the Punnathanam nutmeg variety from the local varieties he brought to Idukki from his grandfather’s farm in their native place. This was achieved through years of observation and experiments. He developed the improved variety through several rounds of propagation through nutmeg kernels. At present he has about 120-125 plants of fruiting period.

Punnathanam Jathy is an extra-large nutmeg variety developed in 1994 through selection from a local variety and further multiplied by budding.

The variety gives nutmegs of extra-large size (4.5 cm long & 3 cm wide). A full bearing Punnathanam Jathy tree gives an average of 3000 fruits/tree/year and theweight of 50 dry fruits is 1kg & weight of 250 dry maces is 1 kg. There is comparatively less breakage of fruits and the variety is tolerant to pests. The variety is being cultivated organically and requires less maintenance.

Varkey has a small nursery of Punnathanam Jathy started about three years ago. The saplings developed from the kernels include both male and female ones. It is his special skill which enables him to select the female samplings, which he sells, by visual selection. Varkey says that he is the only one farmer in the locality who sells the saplings raised from kernels. He prefers kernel-raised saplings over budded ones because he claims that the kernel-raised trees live longer, even more than 90 years with good yield.

Apart from nutmeg, he cultivates black pepper, cocoa and cardamom. He completely follows organic methods for all the crops and uses a special mixture of fertilizer called jaivamrutham. Even in his late 70s, Varkey is still quite active in his farm and feels happy about his life as a farmer. For his contributions in agriculture, he has received recognition at various levels and his work has been published in vernacular newspapers and periodicals.