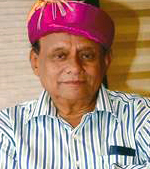 Hailing from Satara district of Maharashtra, Chandrakant V Pathak was a serial innovator, social entrepreneur and a dedicated social worker. Not only did he himself develop various utility machines for common people, he helped upgrade technical skills of thousands of school dropouts, contributed to many social causes and promoted science, technology and innovation among the common people.

Chandrakant completed his schooling at Satara only. Since childhood he was quite creative and had a keen sense of observation. He kept on experimenting something or the other. His interest in tools and machineries made him pursue engineering. He worked in various setups in Maharashtra and Gujarat for a few years and then returned back to Pune, where he had relocated.

Innovations for The Society

Chandrakant was motivated to do something new and unique since the very beginning. Being an engineer and having a special liking for machineries, he worked on a number of innovative products, which were energy-efficient and appropriate for the rural and as well as urban areas.

He devised a bullock lifesaving system wherein sturdy accessories were designed for the bullock carts to update their safety. He also has developed a ‘flat belt brake system' fitted to the rubber tyre of the cart so as to help in regulating the speed and stopping the cart without causing injury to bullock. Then he made the ‘Vanarai bicycle pump’, which was mounted on the carrier over the rear wheel of a bicycle. It can be used for lifting water for various purposes like development of dry land, as a fire extinguisher, for construction work, use in gymnasiums and for irrigation. The bicycle can be taken to the water source, parked and peddled on its stand to operate the pump. His other innovations include bicycle-mounted spray pump, stump-drip-irrigation system, vegetable grinder, sprinkler, flourmill, etc., and were well received by the people.

While working in Gujarat, Chandrakant observed people from lower income section and identified the lack of technical skills in them as one of the causes of low income/ poverty. This motivated him to do something about it. After returning to Pune in 1964, he established Modern Technical Centre, a non-governmental organisation, with an aim to impart technical education and skills to the 7th grade students who could not afford further education. The quality training provided by the NGO helped many students and some of them got recruited by renowned companies such as Kirloaskar, Telco and many more. Later Modern Technical Centre started giving training to deaf and disabled students as turner and fitters as well. Before undertaking this, Chandrakant undertook a short term training course himself so that he understood what was to be trained and how.

After his marriage in 1970, the centre established a technical division for the women, Chandan Enterprises in 1974, primarily due to the encouragement and support of his wife, Neeta. The women training activities were discontinued in 1998 however other activities of enterprise are being carried on. Their two sons, Madar and Kedar, are also engineers and well settled with their family. They also helped their father in his activities and have been taking care of the centre after his demise. Many thousands individuals have been trained at the centre in all these years. He also had started his own Science Energy Park off old Pune Mumbai Road, which is still dispensing information and technologies to common people. Continuing his legacy, in the last two years, his sons have commissioned more than seven Science Energy Parks in different parts of Maharashtra.

With time, the Modern Technical Centre changed its focus from only providing training to coming out with innovative solutions to different problems and providing technology based solutions on alternative source of energy. Situated in the old city of Pune, the Modern Technical Centre is open to the innovators to perform their own experiments; they can stay there, develop their concepts into products and try to disseminate them.

Chandrakant was not only an expert in machinery; he was an excellent cook too. In his free time he liked preparing authentic Maharashtrian food. He liked driving as well; perhaps long drives rejuvenated his mind and helped him get fresh ideas for his work. He was also supporting a number of social causes. He was associated with Sakal Relief Fund, which provided him the opportunity to visit many unprivileged areas of the country, where he observed the poverty and lack of basic necessities. This was perhaps the trigger for many of his compassionate innovations for the common people. Even on the day he expired, he had attended a meeting for providing relief for Uttarakhand disaster.

His work on bullock life saving and other innovations was recognised by NIF in 2002 in its Second National Award Function. He was also honoured by the Sheti Mitra award (2003) by Government of Maharashtra, award for Innovation for Non-Conventional Energy Equipment at the hands of the then President of India (2002), Ashden Award (United Kingdom, 2007-08), MCCI Parkhe Puraskar (1997) among others. However, more than awards and accolades, helping people with skills and technology were his major source of satisfaction. Chandrakant lived a fulfilling life full of hard work, dedication and devotion to the causes he felt close to. He has been an inspiration for all who have known him closely and would continue to do so.