Pedal Operated Drilling Machine and others

Pedal Operated Drilling Machine and others 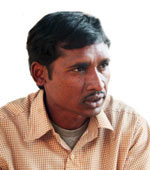 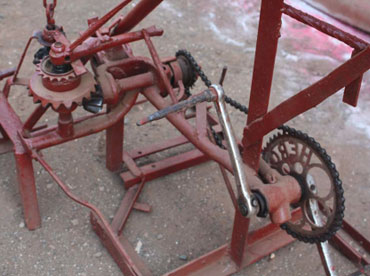 Vikas Shinde (30), a farmer cum welder from Jalgaon is a prolific innovator who has close to two dozen ideas and innovations to his credit. His foot operated drill is fitted with a drill bit, used for drilling holes in various materials. The drill bit is gripped by a chuck at one end and rotated while cycling the device. The plate is attached with a handle for raising or lowering the position of a job. He has made this device by using old gear and spare iron parts. It is used to drill larger pieces of material made of metal, wood, PVC etc. It could be very useful in those areas where electricity is irregular or insufficient.

He stays with his wife and mother and has a welding workshop. He also owns half a hectare land where he cultivates cotton. Most agricultural activities are mostly taken care of by his wife. About his childhood, his mother fondly recalls that he was very notorious but very creative. He liked opening up things and then reassembling them. His favorite pastime was playing his bicycle. Though good at studies, he did not show much inclination towards it and studied upto only class ninth. He wanted to become a businessman but developing the liking for machine as he grew up. Vikas says, "I got interested in tools and machines because of my father. My father was a self-learner. Although he could not go to school, he learnt reading and writing on his own and retired as a senior technician in a government factory". He recalls that once his father had told him that nothing was impossible if one was willing to work hard for it.

Vikas is a self-motivated and ambitious person. His motivation comes from the drive to excel in his life and is ready to walk an extra mile to achieve his goal. Family and friends are of great support to him. They are proud of his achievements. Some of the innovations such as the grass cutting device, waste collectors, radio torch etc have been used by his neighbors and friends.

Vikas decided to start farming after dropping out of school. Every day he used to ride a bicycle to his farm. On the way, if his bicycle got punctured, he used to sit down in a corner and repair it. Many people who saw him doing this approached him when they needed similar tasks to be done. Slowly the whole village came to know of his skills. He opened a shop and continued with his work. He happened to visit his uncle once where he saw an iron bed with no welding, which surprised him quite a bit. He tried his hand at it and did it to perfection. Thereafter he received many orders for the same. With the increasing volume, he felt the necessity of a drilling machine. Some of the options, which were available, were either not suitable for him or not affordable. Hence he decided to go ahead and make one himself.

This is a foot pedal operated manual drilling machine suitable for drilling larger pieces of materials made of metal, wood, PVC etc. This is useful especially in those areas where electricity is irregular or insufficient.

In this machine, the power is transmitted from the pedal to the drill through different transmission gears. It can also be operated by a motor by connecting the device pulley to the motor pulley. Using this machine, an average human being can produce 150 rpm of drill bit.

Though drilling machines are available in the market, the pedal operated ones are not found. Most available are electric operated semi-automatic or automatic. Costing about Rs 2000/-, this machine is very helpful for small scale workers and fabricators. The value addition of this product is under process with the financial support from National Innovation Foundation (NIF). Patent (1016/MUM/2011) has been filed by NIF in his name. Vikas and his wife were also invited for the Innovations Exhibition at the President House in 2010.

Besides the pedal operated drilling machine, Vikas Shinde has innovated many other simple but effective machineries. He receives the inspiration for his innovations from daily needs. The main point to note in all his works is that these are simple and utilize National Innovation Foundation - India 109 junk, scrap and waste materials. Among many others, some of them are: Motor cycle operated pump: Facing electricity problem in his field, he developed this water pump, which drew power from his motor cycle's engine to lift underground water; Multipurpose Farm Machine: Using spare parts of a motorcycle, he developed an agricultural machine, which can be useful to cut grass, plough soil and make markings; Jhoola washing machine: He has also developed a washing machine, which can be attached to any swing. It enables the user to wash his/her clothes while enjoying the jhoola ride.

Vikas is passionate about innovating devices, which are energy efficient, cost effective and can be used by many. He wants to improve on some of his current innovations particularly the water pump and farm work vehicle as currently not many people are able to use it. He intends to standardize a few parts, so that operating these machines becomes easy. Vikas says 'when I made these equipments my only intention was to make them work and hence I did not paid much attention to these aspects however now I would like to standardize them and work on their appearance as well.' Incremental innovations in the waiting!