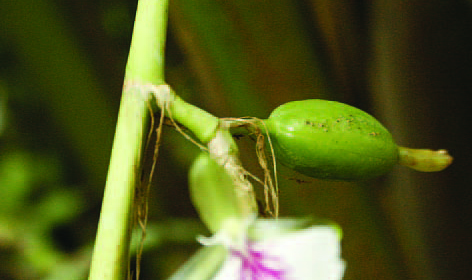 ‘Our economy is based on agriculture; innovation and innovators are very much essential for the sustenance of agriculture, but unfortunately they are not getting adequate respect and recognition’

Progressive farmer Joy Peter (60) has developed a cardamom variety through selection process. The new variety is less prone to biotic and abiotic stresses and its ripe capsules retain green colour and size even after drying.

Farmers of Idukki, from where Joy belongs, are known for their hard work and determination. They struggle and fight with the extreme hardships of natures for survival. Steep slopes, adverse climatic conditions and problems of wild animals are main obstacles faced by these farmers.  Joy Peter, who has studied only up to class four, has 50 acres of land. Here he grows plantation crops like cardamom, pepper, coffee, vanilla, clove, nutmeg and arecanut. Of the total area, 20 acres is devoted to cardamom cultivation alone. In his family, there are seven members including three children (two sons and a daughter), his mother and a sister.

Joy Peter’s family migrated from nearby Ernamkulam in 1948 when he was 10 years old. His father, a business man, due to business failures, had to sell off their native land and purchase nearly 2 hectares in Adimally, Idukki. Later, his father started the business of spices at Adimally. Since his school was ten km away from his house, Joy discontinued his regular studies and joined his father. He grew up to be a successful farmer and expanded his father’s work.

Joy Peter specifically narrates an incident, from where he got the inspiration and determination to do well in life. During his school days, after a long walk, he came back to his home when his father asked him to go to the market and purchase grocery. As he too tired, he refused to do so. This irritated his father, who then commented that he was good for nothing and it was waste spending on him. His father did not mean to hurt him intentionally but this comment left a deep impact in young Joy’s heart. He then decided to prove himself before every one. That day onwards he started working hard. It was quite emotional when one day his father was praising him for his success that he narrated this incident.

Being a man with scientific outlook, curiosity, and keen observation, he spent most of his time experimenting in the field so as to substantially incre­ase the production and income from his farm. He used to grow and experiment with arecanut and coconut crops on his farm. But since cardamom was more profitable, he decided to concentrate on cardamom plantation. In 1990s most of the cardamom varieties grown were traditional ones, viz., Malabar and Vazhuka. He heard about Njallani variety and tried to cultivate it. But because of the low altitude, the yield was not good. Also it was more susceptible to thrips and stem borer.  Still he was able to cultivate 300 to 400 Njallani variety plants by clonal propagation.  He was well aware of the efforts of Sebastian Joseph (NIF awardee 2001) in developing Njallani variety. This inspired him to start experiments to develop a locally adaptable variety.

Joy was growing Mysore, Malabar and Vazukka varieties of cardamom in his field. The Vazukka variety was grown in between the other two varieties. In 1993 out of grown cardamom plants (Vazukka variety) he noted two plants having special characters of thick and long leaves, and vigorous growth. He closely observed these plants for two years. He then collected the seeds from these two plants and he got around 1 kg of cardamom from these two plants. He separated two clones each from two plants and planted them nearby his kitchen for close observation. By 1998 he was able to separate 12 clones and obtain 70 plants by clonal propagation by 1999.

From these 70 plants he was able to develop another 1000 plants. Most important characters that he found in this variety was increased and uniform production of tillers. The variety was adaptable to less altitude, drought conditions and was less prone to pest attack too. The tillers were branched and 95% berry setting was observed in this developed variety.  He then gave his house’s name ‘Panikulangara’ to this variety and started commercializing it in 2000.

The Panikulangara Green Bold No.1 variety

Productive tillers in Panikulangara Green Bold No.1 are comparatively higher than Mysore and Malabar varieties.  As the capsules of innovator’s variety are bolder (80% of the capsules are of more than 8mm size) than Mysore and Malabar varieties, farmers growing this variety (Panikulangara Green Bold No.1) have the advantage to get more profit. The variety is less prone to thrips, borers and Azukal disease, so it can be grown without much care. It is also a short duration variety (75 days after flowering).

Lack of adequate irrigation facilities is a major constraint for cardamom cultivation in Idukki district. But Joy Peter’s variety performs well under rainfed condition and hence it is suitable to be grown in the areas where there is a lack of irrigation facilities. Significant differences in the characters viz., yield per plant, capsule’s shape & colour and its duration are observed in Panikulangara Green Bold No.1 after selection from a land race, Vazhukka type.

This new variety Panikulangara Green Bold No.1 was formally released by the former Director of Development, Spices Board in 2000. That year itself he sold more than 6000 clones. Farmers from different parts of Kerala, Tamil Nadu and Karnataka approached him. Media also gave quite a bit of publicity to this variety.  Local KVK also studied the variety and felicitated him. Scientists from Kerala Agricultural University also visited his farm. Till date he has given more than one lakh seedlings all over Kerala.

Subsequently, NIF requested experts to evaluate the variety and verify the innovator’s claims. Indian Cardamom Research Institute in its report mentions that the variety is tolerant to drought and seems to be resistant to stem borer also. The variety is more greenish, requires less shade (40%) and bearing tillers range between 110-120 numbers. The yield per plant is 6-8 kg and the capsules retain an attractive green colour after drying. Also its dry recovery percentage is 4.5:1kg.

Director Research, Indian Cardamom Research Institute, Spice Board, in his report mentions that the quality characters of the capsules like colour, size, oil content, oleoresin, etc are at par with other landraces and released varieties.

So far Joy Peter has sold more than one lakh seedlings all over Kerala. The success of Panikulangara has given him courage and confidence to continue his research. In his farm he found another plant, locally known as malainchi (wild ginger), which was very similar to cardamom. The plant can be grown in less shade and is disease resistant.  He has developed a cross between Panikulangara and wild ginger. The cross showed vigorous growth under less sunlight condition. A common disease of cardamom, azhkal (rotting of shoots) was not observed in this variety. He has undertaken its clonal propagation and given the name Panikulangara No 2.  He has also started selling this variety along with Panikulangara No 1. Till date, he has sold about 23 thousand seedlings.  He is also preparing an improved cardamom curing house.

For his innovative efforts he has been honoured by KVK, Santhapara, Idduki in 2002. Prasar Bharti, All India Radio has also awarded him for adopting modern agriculture techniques in April 2008 at New Delhi.