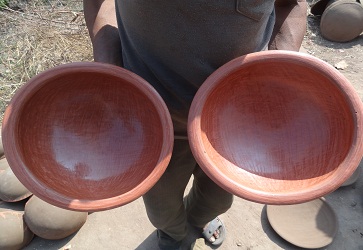 The use of non-stick cooking ware is traditionally considered as an urban prerogative. Who would image that rural communities in our backyard would be using non-stick coating on their earthen ware and doing it naturally. Strange but true! Members of Dhanuka, Nayak and Bhil community from Chota Udaipur region of Gujarat and nearby areas in Madhya Pradesh have been traditionally using lac to coat their earthen utensils. Ambala, in Chota Udaipur, is among the few villages known for lac coating of earthenware making them suitable for making chappatis and better cooking of other food. Other villages of Gujarat where this tradition of lac coating can still be found are Devhaant, Kharkhad, Teemla, Bodgaon, Rangpur and Kanalwa and in Madhya Pradesh mainly in Chandpur and Khandala villages. Lac is used so that oil does not get absorbed in the earthenware. This way it uses less oil and ensures that the surface of the pot or the pan stays hot. It also prevents the surface from being scratched or damaged while scraping the food. Lac is obtained from the secretion of an insect Laccifer lacca, inhabiting the Pohim tree. The lac obtained from this tree is shiny and long lasting. Lac generally contains resins (70-80%), sugars, proteins and soluble salts (2-4%), wax (4-6%) and other extraneous matter (9-14 %). Scientific evidence proves that it is non-toxic. NIF also got the toxicity tests done, which prove it is non-toxic.