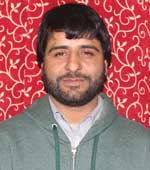 Mohd Rafiq Ahanger (42), a blacksmith by profession, and an innovator, has developed a multipurpose tool, which can be used as an axe, hammer, chisel, blade, screw driverfor domestic or other carpentry tasks.

Born in the family of blacksmiths, Rafiq did not have an easy childhood due to financial problems. It was tough for his father to raise eight children, two sons and six daughters. He mention that though they come from lower income background, he never felt poor due to the many sacrifices his parents made for their children, in an attempt to give the best possible upbringing. Since childhood he had access to blacksmith tools, iron and steel, with which he liked to play a lot. He tried repairing old gadgets, make toys from iron, or simply make small replicas. His parents never stopped him from doing anything he wanted. He studied till class ten and then took up odd jobs before finally settling into his father’s workshop.

In 1995, at the age of 20 years, he started his own workshop where he started making grill gates, different iron structures for household use along with the motor repairing work. Born and brought up in a rural area, Rafiq identifies with the problems people have to face and that reflects in the kind of products/ innovations he comes up with. Given the pathetic condition of electricity in the region, for his workshop, he was in dire need of an electricity generator but he could not afford it. He thought of designing a pressure generator for producing electricity by pressing it continuously. Rafiq claims to have developed a generator,which could that can produce 40W electricity by pressing it continuously. This won him a lot of admiration in the district and he got invited to the Islamic University of Science and Technology to demonstrate his device. For there he got linked to the GIAN Cell J&K, regional office of NIF established in partnership with the University of Kashmir, at Srinagar.

Rafiq devotes most of his time working on his innovations and developing new prototypes. His wife has been very considerate and supportive of his efforts and has offloaded much of the family responsibilities from his shoulders so that he can continue his work. She hopes one day the persistence of her husband gets recognised. 'Mehnat tas Chu fal', she says meaning hard work secures reward.

Genesis
Rafiq lives in a village and frequently faces problems using the many available agricultural tools for different works like carpentry work, agricultural work, wood cutting etc. He realized that if there could be a multipurpose tool, not only cost but carriage and storage will also be easy. The multipurpose tool has been designed in such a way that it can be beneficial for both domestic and agricultural purposes.

The multipurpose device is made from high carbon steel and can be used as one of the three tools as per the requirements. This tool can replace or combine various tools into a single product rather than having them separately, for example, as an axe for cutting wood, hammer for fencing, chisel for carpentry, nail remover for removing nails. This tool reduces human effort by combining multiple tools and benefits the user by monetary terms.NIF has filed patent application (280083) and design registration in his name.

Other works
Rafiq has come up with a number of other useful ideas and innovations. He has developed an implement for easy digging, which is a hand tool, and can be used for digging as well as collection of the dug mud/soil.He has also developed an ergonomic spade, automatic sieve, safety jacket for walnut harvesting, modified iron sheet cutter, automatic sickle, and improvedcloth iron among others.

Entrepreneurship goes hand-in-hand with innovation, in 2015, Rafiq was given the non-exclusive manufacturing and marketing license of walnut cracker and walnut peeling machine of Mushtaq Ahmad Dar. The two technologies required considerable modifications to get the acceptability of farmers/ end users. Rafiq had to work on the technologies and refine them. The new products are improved versions of the original technologies, and have been much appreciated by users and experts. However, some refinement is still going on based on specific inputs. To help him in scaling up his innovations, NIF is planning to register a company, “Rafiq Innovations Private Limited”, under the NIF Incubation and Entrepreneurship Council (NIFientreC), a technology business incubator.