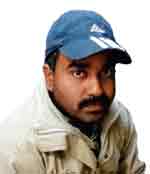 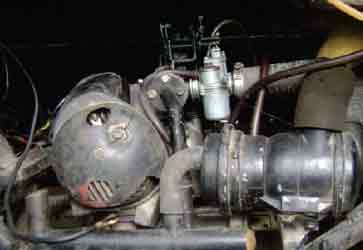 Sib Sankar Mandal (35), a mechanic from Kokrajhar, has modified the auto engine incorporating a process to pre-heat the incoming air for complete combustion of the fuel. This has resulted in significant improvement in the mileage.

Sib Sankar, fondly called “Narayan” is an exceptionally gifted mechanic. Originally hailing from Bangladesh, His family migrated years before the partition. His grandfather was a carpenter but his father took to the repairing of musical instruments. His family comprises his parents, two elder brothers and a younger sister. Ardent followers of the Brahmakumaris sect, the family is highly spiritual and has an ardhnareeshwar temple in their courtyard where his father worships the deity ceremoniously every morning. They also have a big meditation hall in their house where other devotees from their neighbourhood gather every evening and morning for prayers.

As a child, Sib Sankar had good interest in both studies and creative model making. Making various models like wind turbine, water pump, motorcycle etc., he used to participate in science exhibitions and win prizes. Somehow he could not continue his studies beyond class ten due to the poor financial conditions at home. But he continued to work on the science models and took up odd jobs in workshops including electric wiring works, water system work etc. Later he started his own workshop along with his brother, taking some minor repairing work orders initially. Meanwhile he continued to make models, which were exhibited at “Bodo Sahitya Sabha exhibition”, “Krishi Vibhag Pradarshini” etc among others. His Hitachi crane model in an exhibition impressed an engineer so much that he offered him a job at the site of GAMMON in Arunachal Pradesh, but he did not join as it was too far from his home. But he is now willing to explore an opportunity outside Kokrajhar. Apart from his interest in models and mechanics, Sib Sankar has a creative side to his personality as well. He enjoys playing harmonium and singing as well. Watching Discovery Channel is another of his favourite activities.

Since childhood Sib Sankar Mandal wanted to make bike that could run for long on minimal fuel and maintenance. He worked hard to make such a bike in the late 1990s but its performance was not even par with the existing ones, which disappointed him a lot. It was just passion that was driving him and lack of sufficient technical knowledge was a hindrance. The experiments were many times erratic and sometimes he had to redo everything all over again. He started visiting garages where dismantled bikes could be found. While studying the working models of bike engines in garages, he identified gaps, which reduced efficiency. After many rounds of changes, he was able to modify the valve system and the heat chamber, which resulted in increasing the mileage to about 65 km/l. While he was working on the engine, he came to know that pre-heated fuel results in better combustion.

One day, he read news about the phasing out of two-stroke engines. He also learnt in one of the television shows that auto-rickshaws were the most cost-efficient mode of transport. That is how the idea to incorporate his system in auto-rickshaws came to his mind. He worked continuous for many months and did umpteen numbers of trials. Finally he was able to make the desired changes and achieve about 30% increase in mileage. This auto-rickshaw has been running efficiently for the last three years. Moreover, the knocking problem of the auto rickshaw has also been resolved.

Reflecting on his life and work Sib Sankar shares, “Sometimes I felt low especially when I required lathe machine or tools for cutting and so on but could not make an arrangement. I felt frustrated and stopped working. But again something inside motivated me to continue the work. Still sometimes a sinking feeling comes that even after trying so hard I have not been able to achieve much in life.” He takes solace in the fact that his family has been by his side all this while and strongly supported him in every decision of his. He does not have many friends as he believes people do not relate properly to what he thinks or does and hence, he likes to be on his own. Apart from the family, he appreciates the support provided by NIF Assam Cell at IIT Guwahati.

The innovation is a modification of an auto rickshaw engine assembly. In the modified system, a part of the exhaust gas is utilized to heat the incoming air while the remaining part is utilized to heat the mixture containing both the air and fuel before the entry to the engine. This is to ensure the complete combustion of the fuel, which results in increased fuel efficiency.

The heat from exhaust gas is utilized to warm the intake air by means of a heat exchanger having surface contact with the silencer pipe. Some exhaust gas is channelized to the carburettor section, which is used to heat the air fuel mixture using another heat exchanger. Besides the cylinder valve has also been modified in a manifold way so as to ensure that the air fuel mixture does not move out from the cylinder.

Using this system, lesser harmful pollutants are released in the environment due to improved fuel combustion. Also, the temperature of the exhaust gas is less, ensuring that heat does dissipate in the environment. The system was tested at IIT Guwahati, which reported that the fuel efficiency increased by 35 per cent using this system in comparison to other conventional engines. It was also mentioned that preheating both the intake air as well as the charge using exhaust gas was a new concept which is possible for other three wheelers as well. With the support of NIF, an improved prototype is also being made and further tested by the IIT Guwahati experts.

Prior art search has disclosed preheating methods of intake air (for cold start) for small period of time. But none of the system showed the capacity to perform two levels of preheating and the alternatives available are only super charging and turbo charging where increased intake of the exhaust pressure is allowed to enter in the combustion chamber for better combustion. Hence considering the novelty of the system, NIF filed the Patent (1811/KOL/2008) in the name of Sib Sankar Mandal.

At present Sib Sankar Mandal is using this system in his auto rickshaw and is satisfied with the performance. Earlier, NIF had facilitated Mandal’s visit TATA motors at Mumbai and Lucknow where he explained his concept. NIF also extended financial support to him for the development of prototype followed by facilitation at IT Guwahati for testing.

Since child hood Sib Sankar dreamt to work in the research department of some good automobile company. While he acknowledges the limitations of his education and professional training, he is keen to work in the automobile sector. Presently he is developing a sports car and trying to improve the fuel efficiency of the four stroke old Maruti engine.

Sib Sankar Mandal has a great piece of advice for other fellow innovators. He mentions that innovators may work hard with great zeal to do something new but even hundred per cent efforts may also not yield results sometimes. This does not mean that the world has come to an end; one should take things in their stride and move ahead. There are many other duties to perform as well.