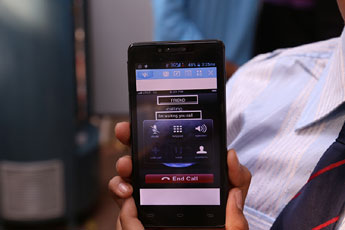 Many a time when a call gets disconnected, the two phone users start calling the other person. As a result the phone remains busy and the call does not go through. Jenish’s idea is to have a mobile app, which intimates the other person that the first person is calling and s/he need not dial back.

The idea struck Jenish while preparing for his science project one night. It was late and he was on call with his friend. Once the call got disconnected due to network congestion, both persistently kept on trying to call each other and thus lost much time. He thought if such a situation arose during an emergency, problems may arise and came up with this idea.

Good in studies, Jenish likes sports as well. Technology especially robotics interests him a lot. He already speaks four languages and is learning German and French. He wants to grow up to become a knowledgeable person