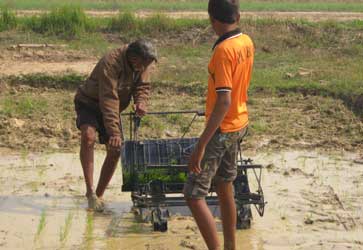 Facing labour scarcity for transplanting paddy seedlings in the field, Ranjit Mirig (60) developed a manual paddy transplanter to do the same. He developed the first prototype in 1986 and kept on modifying it till he could develop a successful model in 2008. Facilitated by NIF, the transplanter has been further modified with the help of IIT Kharagpur.

Ranjit Mirig was born in a poor Dalit farming family and could not study much because of financial problems. In 1986, after many years of having troubles in dealing with farm labourers for rice cultivation, he decided to make machine that can help him be independent. He was tired of labour costs, difficult labour management and unfair demands from labourers. He started work on a paddy transplanter then. It took him over 25 years to come up with a satisfactorily working model and the journey has been tough. In one of his poetic moments, he says,

When he started working on the paddy transplanter, he could not believe that Indian scientists had sent successful space missions but no one had been able to make a proper paddy transplanter for Indian farmers. This inspired him to work on this problem. He says that often he was so lost in his work that he would forget to eat or sleep, almost have accidents on the road, and sometimes his wife would be angry with him for not drinking his tea while it was still warm. A couple of times, he recalls, the tea would go cold and flies would drop into it; when his wife got angry, he would simply pick out the flies and drink the tea.

The manual paddy transplanter requires two persons for its operation. One person is needed to pull the machine while another for cranking the handle in order to provide drive to seedlings’ trays and fingers, which place the seedling in the soil bed. The machine can transplant five rows while maintaining row to row spacing of about 18 cm and plant to plant spacing of about 15 cm. It has a field capacity of 0.3 acre/h. When tested at IIT Kharagpur, which NIF facilitated, it was found to consume less than one-seventh of the time required for manual plantation and double the time needed by a self propelled machine to cover the same area.

Ranjit Mirig hopes that this machine will alleviate Indian farmers’ problems and bring happiness to them. He also wishes that his younger generation skips the pain and suffering that he had to go through. He wants his grandchildren to take the machine forward. And his doting grandchildren are very enthusiastic about it. All of them have contributed in their own small way to get Ranjit where he is today.

He is grateful to his family for supporting him all the way. He first wife, who passed away over a decade ago, never complained about him spending long hours working on the machine. His current wife has been very supportive too. His children and grandchildren are proud of him. But he has painful memories of how the villagers treated him, calling him crazy and often ostracising him. He does not feel that perception has changed much even now. Although locals have started hearing about his accomplishments, they still don’t acknowledge him and spread rumours about him. After a slight grimace, his face beams again as he announces, “As much as people have wronged me, God has done me right!” He believes the biggest proof of this is the respect and recognition he has found from all corners.