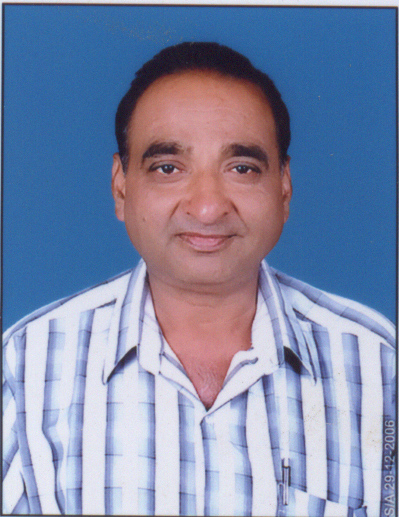 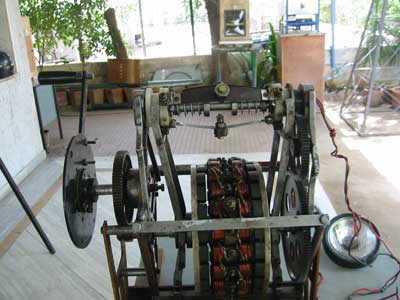 Dineshbhai Ashodia (49) has made a power generator operated through wind energy. This generator also works on very low wind speeds and gives a constant output despite variable wind speed.He has studied up to class tenth, was born and brought up in Nagvadar village in Upleta Taluka in Rajkot district, in a family of blacksmiths. For the last twenty years, he and his family, comprising his wife, two sons and his mother, are staying at Rajkot.Dineshbhai continued his father?s profession, which was welding and fabrication work. His two sons had to discontinue their studies after tenth class only due to financial constraints and join their father in fabrication work.He earns about Rs. 4000 per month from the work of fabrication that he gets locally. With no workshop of his own, he works at one corner in the compound of a Lathe Machine Manufacturer named Gayatri Machine Tools.Being a prolific innovator, he has developed many products such as windmill operated water pump, solar cooker, solar water heater, a few amusement games, etc., apart from the innovative wind operated power generator. Most were developed making some changes in the conventional items.
Genesis
Dineshbhai stays in Rajkot where there is a frequent problem of power supply. The cost of electricity burnt a huge hole in his pocket.He observed that many conventional windmills set up in Gujarat are not operational at low wind speeds. The generators in conventional windmills become operational only with the minimum cutting speed of seven to eight km/hr.He also observed that variable RPM of the prime mover caused variations in power output and progressive smoothening was required to generate constant power.He built a dynamic system with a governor, which uses centrifugal action during revolution to increase the distance between coils and magnets. Using this, it can start even at very low speeds and subsequently adjust this gap to match wind speeds.The electronic circuit linked to the generator would then provide the desired constant power output.It was during the same time when Dineshbhai was working on this wind power operated generator that his wife had a paralytic attack. She already was suffering from diabetes; the next couple of years were stressful, causing much mental anguish and financially strain. However, the family stuck together and the bad tides passed over. During her illness also, his wife was supportive of his work and used to encourage him a lot
Innovation
The wind operated power generator has two main mechanisms: the flexible stator-rotor system, which delivers power as per varying wind speeds and the governor system. These features of this generator have made it capable of delivering constant output and the capacity to work on low cutting speed, as against other similar devices1 .The AC power generator runs on the principle of mutual inductance. Any prime mover, such as wind power or hydraulic turbine or any source, from which rotary motion is available, can drive it.The highlight of this innovation is the ability to use centrifugal force, generated in the main power shaft with the use of governor, to vary the gap between stator and rotor elements. This allows very low cutting (wind) speeds to start the generator by increasing the air gap at start up. The governor facilitates reduction of this gap at higher speeds. Since the generator output is available from the stator, which is fixed, this does not require brush or slip ring.The shaft rotates and the centrifugal action helps in varying the gap between stator and rotor elements. When the rotor shaft gains momentum and the speed is increased, the centrifugal weights of the governor fly outwards actuating two levers and bring both the pairs of stator and rotor together with minimum air gap.Using commonly available materials, the innovator has built first functional prototype for Rs 7000 and more work is underway to test and standardize the product.Nirma Institute of Technology, Ahmedabad has also tested this machine. It has been submitted by NIF and GIAN West to TePP as a project proposal for funding and development.This product once fully developed will aid introduction of wind operated energy devices in areas with low wind speeds and will provide a green sustainable energy generation solution. Considering the compact size of the generator and wind blades, it could be fitted on terraces and building in urban areas as well as fields in rural regions.The patent has been filed in USA with the pro bono help of KLNG through SRISTI. 1 Following patents have been found to have some commonality with this innovation of windmill operated variable speed generator, viz. variable speed wind power system with improved energy capture via multi-level conversion. (Patent No. US452570) and variable speed wind turbine with reduced fluctuation and a static VAR mode of operation. (Patent No. US799416). In both the cases the mechanism used to control the output of the generator is totally different from that in the present innovation. Similarly, patent US6900998 describes a variable speed power system with improved energy capture via multilevel conversion, which includes a matrix converter using full-bridge, multilevel switch cells, in which semiconductor devices are clamped to a known constant DC voltage of a capacitor. Another system, which is described in http://www.automation.siemens.com/ld/windkraft/ is based on dual-feed slip ring generators, which is widely used.