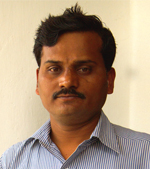 Price :   Innovator offers Services and Charges are Rs. 2000 per service.

Though Girish hails from an agricultural family, he always had a keen interest in making electronic and electrical gadgets. His father is a farmer but also has good knowledge in repairing electronic motors and vehicles. The youngest among five siblings, Girish has had the experience of repairing electronic gadgets, film projector as he helped his father since his school days. While in class 7, he started reading Electronicfor You (EFY Magazine), which made him understand electronic circuits. He started experimentation on the circuits and in1996, he made first project of IR sensor successfully. In 2005, he collaborated with friends for aroadlightsaver project. His friends invested in the project but due to some reasons, they withdrew their support and insisted Girish to return the investment in cash, which Girish was unable to do. He had to sell all his equipment to repaythem.

This pushed him to the brink of committing suicide. However, sanity prevailed and he realized that he could still use his mind to turn around the situation he was in. With backgroundinagriculture and knowledge of electronics;hestarted thinking of providing solutions to farmers.With time, he developed many automated agriculture products namely bird repeller, energy saver devices, automated irrigation devices using mobile and solar energy, borewell scanner etc. Girish also helps and assists school/ college students in designing and assembling the electronic projects for their science and engineering project works. He got married in 2011 and has a son.

Poor and sporadic rainfall in Bijapur in 2006 resulted in shortage of ground water. The bore wells failed to show any ground water. The farmers were in dilemma toinstall motor pumps or not at their bore wells. Girish tested the water presence manually at different places using manual soundreflection. Then he realized that there was need to see the problem from inside the dug bore well. He experimented with normal camera, but could not succeed. Then he looked out for solutions and found that the bore well scannersavailable are too expensive and not easily availablearound his place. He wanted to build up multifunctionaldevice, which can check stones blockages, water inflow and outflow direction. The device thatcould also withstand underground conditions like pressure, temperature and can be monitored it from remote place. This triggered him to design a bore well scanner system.

After many trials and failures, he could develop the first prototype bylate 2006. However, within an hour only while testing the device got damaged due to water. After few more trials, changes of components, modification in circuitry, improvements in design and casing, he finally developed his first successful prototype in July 2009. He started testing it atvarious bore wellsnear his village. His device worked wonderfully and soon he was scanning bore wells around his village, taluka and other places. Gradually he started providing his services to more than 300 customers spread across North and South Karnataka. While he expanded his work, he simultaneously kept on identifying the problems associated with his device and kept on improving.

The bore well scanner is alow cost automated capsule shaped bore scanningdevice, which detects ground water availability, its pressure and temperature. In addition to these features, it also measures inflow/outflow rate and direction of ground water.

Borewell scanners are used to ascertain the depth, inflow and outflow of water, kind of water source and the borewell formation (structure and material around the bore). It helps farmers to make an informed decision about going ahead with the installation of motor/pump and the kind of crop to be sown in particular season. This particular borewell scanner is equipped with a High Definition camera, digital compass, temperature and pressure sensors, flow and depth detector, GPS device and a LCD screen to display the assessment results. It weighs about 1.5 kg and can scan the bore well up to a depth of 600 feet.

Girish charges Rs 1500 for the servicesand the availability and status of water inside the borewell. Raichur University has also purchased one unit for its research purpose bore well scanners and study of underground water table. Central Ground Water Board, South Western Region in its communication to NIF has mentioned, “developed technology is very innovative and useful to common men at a very low cost. It is useful to know about the depth of well, depth of casing, water yielding zone/zones and depth of fractures, temperature etc.” They have suggested improvement from an instrumentation point of view to refine it further.

This particular borewell scanner is equipped with: