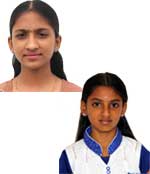 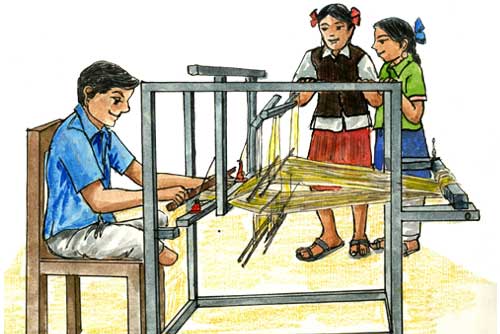 The two sisters have come up with a loom for lower limbed physically challenged. In their loom, they have replaced the pedal operated system with a motor and a gearbox attached to a pulley mechanism.

Erode is well known for its handloom weaving.Aneighbour of Pavithra and Elakkiyahad been a handloom weaver for close to 30 years but, due to severe leg pain, he could not work on the loom as efficiently as he used to. This made the sisters design a new weaving technology without using legs for weaving.

With help from their neighbour, the sisters gathered raw materials from a workshop and began work on their idea. The two faced many hurdles before they could successfully create a loom that they had imagined.

"Our innovation will help those who are disabled tobe self-employed and independent," says the elder one, Pavithra, whose favourite subjects are Maths and Science. She wants to become an eye specialist while her sister wants to be a scientist. Both the girls idolizeDr APJ Abdul Kalam.

"DrKalam's quote'YaathumOoreYaavarumKelir' (every country is your own and all the people are your own)inspires me. I had met Dr.Kalamfor IGNITE 2013 awards, during which he had mentioned mymodified hand cart steering mechanism brake in his speech," says Pavithra, who is a trained Bharatnatyam dancer and likes to read and think about innovations when she is not studying. She has participated and won awards at several science exhibitions around the country.

Elakkiya is a chess player and a dancer. "Our mother has supported and encouraged us a lot in developing innovations," says Elakkiya.Both the sisters want to fulfill their father's dream of setting up a science and innovation centre in their district to encourage more innovators.