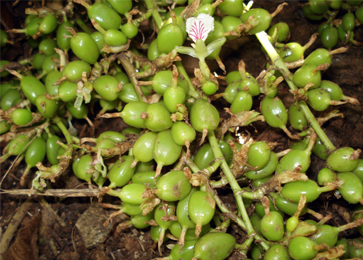 K.J. Benny, a farmer from Idukki district of Kerala, has developed an improved variety of cardamom named “Elarajan”. This variety is a Vazhukka type with characteristic uniform bold capsules of about 9 mm size (80-90 %) with high yield.  Originally hailing from Kottayam from an agricultural family, K J Benny (45) grows cash crops like pepper and cardamom. As a child, every day in the morning and evening, he joined his father and brother while they worked in their fields. Being an average performing student, he decided to involve himself fully in agriculture after higher secondary.  His family includes his wife who is a teacher in a secondary school and two sons. His wife also finds time to help him in his agricultural works and supports him wholeheartedly. Both his sons, though quite young, also show keen interest in agriculture. He believes agriculture to be the best livelihood option where hard work is a must. Benny’s mantra for successful life is ‘Success lies in hard work’. All his achievements and innovations are the products of this belief and attitude.

Genesis of the Innovation:

The Vazhukka variety of cardamom has been widely grown in the region where Benny lives. Sebastian, a cardamom grower from the same village developed an improved variety named Njallani and received a National award from NIF in 2001. His achievement was widely covered by the media. This made Benny realise the possibility of developing new improved variety of cardamom himself. The seeds of Vazhukka variety were collected from his field for plantation. When the plants were about 1 feet high, they were transplanted to a polythene bag and later to soil when they became 2 feet high. Out of the 500 seedlings he prepared, he noticed five plants with vigorous growth bearing bold cardamom capsules. He further observed and selected one plant and propagated through suckers. He planted them nearby his kitchen so that the growth could be closely observed. They also showed the same characteristics. Lengthy panicles with bold seeds (9mm capsules) having more than 70 tillers were noticed as the unique features. After 5 years of efforts, in 2007 Benny could stabilize the characteristics of this high yielding cardamom variety. He named it as Elarajan meaning the king of cardamom. When shared with his father and brother they were also amazed seeing the bold seeds and high productivity.

On an average, the variety takes 80 days for maturing after flowering.The number of capsules per panicle is very high totaling up to 1400 capsules. Seeds per capsules are 23 to 26 and provide the yield of about 12500 kg green and 2500 kg dry capsules per hectare. Njallani variety provides an average yield of 800-1300 kg/ hectare and the other local varities provide 1500-2150 kg / hectare. Besides, the stem is also fibrous which resists the attack of stem borer. The dry recovery ratio is 1:5 per green cardamom, which is considered as a good ratio as per the experts. Most significant feature of this variety is its bold capsules, which helps it fetch high market price for the farmers, about 10-20 per cent higher than that of the other local varieties.

The testing and validation of the variety was done with the help of Indian Institute of Spice Research, Calicut and Indian Cardamom Research Institute, Idukki. Both the institutions certified that about 80- 90 per cent of the capsules grade from 8-9 mm (80-90 %) with high yield. The variety is moderately resistant to disease and pests as well. The price of cardamom is based on its grade. The cardamom available in the market belongs to the grade 5mm-6mm. Sometimes very rarely 7mm grade cardamoms are also available. The Elarajan cardamom is bold and a good percentage of capsules grade from 8mm-10mm, hence fetching more market price.

In 2007, his father K.J. Baby got a National Award for his white flowered cardamom variety in the Fourth National Competition of NIF. His father is a respectable social worker and was also the then President of Cardamom Growers Association, which had about 2000 farmer members. Lot of farmers came to visit his farm when they heard about the features of the variety, local channels also covered the news and the demand increased. He started selling the suckers and his brother started a nursery. Till date, they have sold more than 60,000 suckers. But Benny wants to concentrate on cultivation only rather than raising a nursery as he believes that the cultivation of cardamom is more profitable than raising the nursery. This variety has now diffused to nearby Karnataka and Tamil Nadu as well. Recently, a leading plantation company has placed an order for 25000 suckers.

Benny’s experiments are not confined to cultivation and nursery raising only. Besides cultivation, cardamom processing is also one of his interested areas of research. He has designed and developed a new model of cardamom processing machine. In this model, it is claimed that at a time about 450 kg of cardamom can be processed in 26 hours with less firewood than the conventional driers. The experiments continue as he plans to bring down the drying time to 20 hours.

In March 2011, Benny was selected by NIF for participating in the Innovations’ Exhibition at the President House, New Delhi, which he considers as one of the most prestigious moments of his life. ‘This is a lifetime achievement for an ordinary person like me’, exclaims Benny.  He advises his fellow innovators to concentrate on their work solely and adds that fame will come in its own time if we do our work well, and that there is no need to chase name and fame.