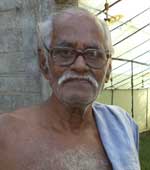 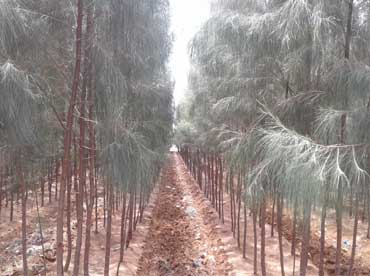 Educated up to only class fourth, Vengadapathy Reddiar (70), an agriculturist, has developed various new varieties of Casuarina spp. and Crossandra spp. by cross breeding, optimized gamma radiation treatment and subsequent mass selection method. Improved varieties of Casuarina spp. MIQ and Modi - 1 have been accepted by many farmers for cropping as they have fast and uniform growth habits, whereas Crossandra spp. having many varieties such as Modi-1-3 and Kalam-1-3 which have unique pattern and colour.

Given his inquisitive nature, Vengadapathi Reddiar gathered a lot of knowledge in agriculture and floriculture though he is a school dropout. He explains that flowers have a lot of role to play in a person’s life from birth till death hence he has dedicated his life for the cultivation of flowers and their improvement. He owns a nursery (agriculture) and tissue culture laboratory. He lives with his wife and a daughter who helps him in managing the accounts. He has ten acres of land where he plants Casuarina and so far he has developed 14 varieties of Casuarina by cross breeding, gamma irradiation induction and mass selection and about 100 varieties of Crossandra of different colors by mutation and pollen crossing methods. He is also working on other crops such as neem, amaranthus, lemon and chili.

Genesis:
His family had been mainly working on Crossandra varieties. Hence, since childhood, he had been watching and working on floriculture crop multiplication by normal propagation methods. Before 1960, the scientific technology for propagation of Crossandra was not much known. He first started a tissue culture technique to propagate the plant through micro propagation. In 1972 he started work on Crossandra local variety, which got affected by Fusarium wilt. Initially he collected wild Crossandra species from the forest area and crossed wild Crossandra pollen with the cultivated local variety and developed 3 types of lines viz. a) lines which had seed setting ability (Diploid) b) seedless sterile lines (Triploid) and c) lines with partially developed seeds, which could not germinate. Later he actively involved himself in developing new varieties of Crossandra in different colours including red, yellow, pink and violet through indigenous tissue culture and induced mutation techniques.

In 1975 he started research on traditional Casuarina equisetifolia and Thailand variety Casuarina junghuhniana by comparing seed and vegetation propagation methods. He exhibited that shoot tip method for propagation was best for uniform and effective growth. He tried through many sources for permission to use irradiation technique for induced mutation. However, in 1999, Indira Gandhi Centre for Atomic Research, Kalpakkam agreed to provide support for his research, which he has been using since. He prepared an innovative mist chamber to facilitate early growth of plants. He then standardized the technique of nodal stem cuttings in mist chamber and distributed several lakhs of Delhi Crossandra saplings to farmers, widows and below poverty line people of south India free of cost through Indian bank.

The innovation
Vengadapathi Reddiar uses optimized Gamma radiation protocol to facilitate variety development in Crossandra spp. and Casuarina spp. The special features of Crossandra spp. developed by him are variation in colour, from dark red to yellow, good shelf life and disease tolerance. In Casuarina spp., high wood yield (200 ton/acre after 5 year) with 90 per cent uniform growth and tolerance to insect pests, are the special features.

Crossandra spp. has been taken by various research institutes as a treatment for comparing their varieties such as by DR. YSR Horticultural University and the germplasm has been submitted to NBPGR, New Delhi. DNA fingerprinting analysis was undertaken by Indian Institute of Horticultural Research, Bangalore, where similar DNA banding in his varieties of Crossandra spp. were found. Feedback from forest officers and famers from Tamil Nadu and Andhra Pradesh confirms that MIQ and Modi variety of Casuarina spp. are very effective in higher and quality yield as compared to the local varieties available in the area.

In an on-farm validation study in Tamil Nadu and Andhra Pradesh performed by NIF in 2016, it was found that in comparison with local Casuarina variety (Nattu), the variety of Reddiar (MIQ) recorded 44.4 per cent more height (65 feet in 4th year) and 33.3 per cent more yield (80 tons in 4th year). The variety also produced more qualitative wood in form of better stem straightness and lesser sub branches.

The varieties have diffused in surrounding villages of Pondicherry, Tamil Nadu and Andhra Pradesh. In 2012 he was awarded Padma Shri by the Government of India for his outstanding efforts in the field of variety development especially for Crossandra spp. He was also conferred upon an Honorary Doctorate of The International Tamil University, Maryland, USA and Periyar Maniammai University, Thanjavur, Tamil Nadu in 2011 and 2014 respectively. In 2016-2017, he was selected as a member of State Government Committee for Implementation of National Agricultural Development Program. He has receives other accolades and recognition as well.