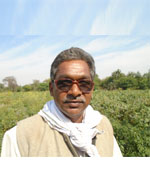 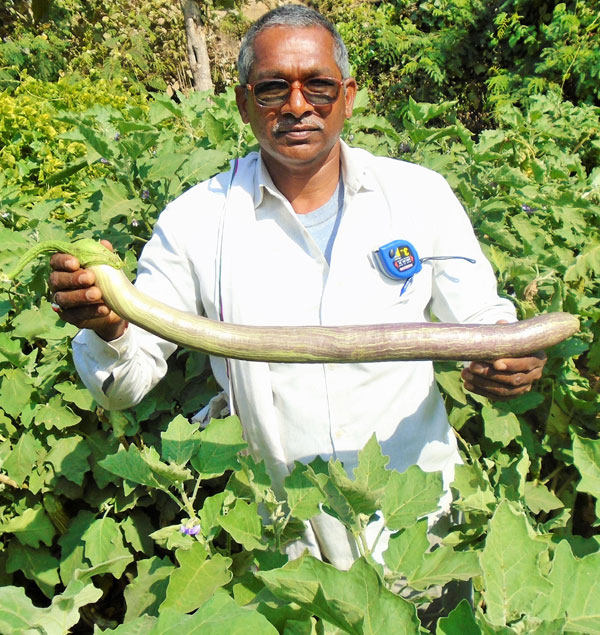 A progressive farmer, Leela Ram Sahu (59), has improved and conserved a good quality traditional brinjal variety and has been maintaining the purity by adopting mass selection breeding method. The variety is known for its fruit quality and its tolerance to major insects and diseases. Leela Ram lives with his wife, two sons, and daughters-in-law in Dhuma village near Nawapara. His whole family cultivates various crops throughout the year. His three daughters are married happily and settled in their respective families. He owns about 7.5 acres of land where he cultivates paddy, turmeric, gram, black-gram, vegetables, and traditional local crops like lakhodi, bhains-teti, and dang kanda. Aware of the water scarcity problem in his area, he started making check dams, which helped him in irrigation of the fields, for which he was much appreciated by the villagers. He thereafter took to farming full time and started devoting his time in his own farm experiments. Leela Ram is also a social worker and guides villagers on the problems shared with him. He believes traditional crop varieties and organic cultivation practices are better for the environment and human health. In 2018, his story has been included in the NCERT textbook on organic farming for standard VI-VIII. In 2019, he has been awarded the Plant Genome Saviour Award by the Protection of Plant Varieties and Farmers' Rights Authority (PPV&FRA) New Delhi.

Niranjan Bhata was developed from a traditional long brinjal ‘Singhi’ cultivar conserved by his forefathers. He has been conserving and cultivating the variety for the last 28 years because of its extra-long fruits, yield, and tolerance to insect-pests and diseases. He adopts the mass selection breeding method to get improved seeds for the next season. The criteria of selection are fruit length, spine on stem & calyx, tolerance to pests and disease, and more fruits per plant.

The Niranjan Bhata variety has long sweet green-purple fruits with spines on stem and calyx. The number of fruits per plant is more than other commonly available long brinjal varieties. The variety is tolerant to major diseases and pests. The report received from the Department of Vegetable Science, Indira Gandhi Krishi Vishwavidyalaya (IGKV) Raipur, Chhattisgarh during 2016-2017 confirmed that the variety Niranjan Bhata possesses extra longer and good quality fruits. The report also confirmed that the variety has a lower instance of insect pest & disease and is a valuable traditional cultivar for research purposes.

NIF facilitated the evaluation and dissemination of this variety in various states like Bihar, Maharashtra, Odisha, Madhya Pradesh, Kerala, Manipur, and Gujarat. Various organic farmers appreciated the performance of the variety. A number of local editions of newspapers have written articles on this variety and Leela Ram has been felicitated at the national level for his efforts of crop improvement in brinjal and organic cultivation practices.