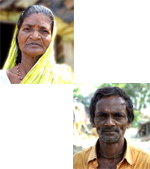 Respiratory distress is one of the fatal and infectious diseases among poultry. The affected birds show symptoms of sneezing, gasping and infection in bronchitis, which may lead to sudden death also. Shatadal Ghorai, and Narugopal Ghorai, both herbal healers, administer a herbal formulation to treat the medical condition in birds.

Shatadal Ghorai (55), a widow, has been practicing herbal medication since her teenage. Her husband was a daily wage labourer who died early leaving behind young children and family for her to take care of. She managed by doing odd tasks at times and receiving alms. She now lives with her son and his family. Her son is a daily wage van driver. Shatadalis not educated but has good knowledge of herbs, which she learnt from her father. Her father was an expert herbal healer who used to give medicines free of cost to the people.

In early 1970’s, lot of chicken in her village died due to respiratory distress. She tried to cure them using herbs she had been using. The medication showed moderate results, Shatadal continued to work upon improving the method of preparation and got better results. She was thus able to help a number of poultry keepers. She has, since then, been using this particular medication to cure respiratory distress and for the same is recognized in her village and around. She does not charge any money for her services however sometimes people give her rice or paddy as token of their appreciation. She is very active in community and social work in her village. In 2013, she also actively participated in a regional workshop of poultry healers and other traditional knowledge holders at Purba Medinipur, which was organized by NIF.

Narugopal Ghorai (51) is a casual labourer from a nearby village and earns his living by traditional folk songs. He stays with his wife, four sons and a daughter. He learned herbal medications from a Guru, whom he reveres a lot. He does not charge any money from people whom he administers herbal medicines however accepts if they give him voluntarily. He is helped by his wife and children in collection of the herbs and preparation of the medications. His desire is to help people with whatever knowledge and resources are available with him.

Respiratory distress is a virus borne infectious disease, which spreads very fast from one bird to another. Commonly known as Ranikhet disease (Newcastle disease), it is widespread all over India. The symptoms include watery discharge from nostrils, gasping, trembling, facial swelling, and sometimes twisting of the neck. Depending upon the severity of infection, mortality ranges between 10 to 80 per cent. Under the effect of the infection, adult laying birds decrease their feed and water consumption with considerable drop in egg production as well. This disease thus also poses a severe economic challenge for broiler and layer poultry industry. Further, backyard poultry farming is one important activity to avail balanced nutrition in most rural areas. Availability of modern drugs, and vaccination of small stocks affected with such conditions remains a great challenge.

Both Shatadal and Narugopal use a local herb (name withheld for IPR reasons) in combination with other herbs to prepare a medication to treat respiratory distress in birds. Medication is given orally twice or thrice in a day depending on severity of the condition. It is administrated until the affected birds get cured, generally within five days.

Detailed prior art search did not yield any report of the use of the particular local herb to treat respiratory distress among flocks.NIF facilitated the testing of the herbal formulation on some affected flocks in Nagpur region. The results revealed that there was significant increase in immunity against the Newcastle disease. The mortality also reduced considerably. In addition to protection against respiratory distress, the medication was also found to be effective against the bacterial infection caused by E. coli in poultry. NIF filed a patent in the name of the healers and is trying to commercialise the product, so that the benefit may reach the poultry farmers.