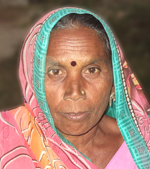 Diabetes is a condition in which the glucose level in the blood increases more than the normal level.As per the Diabetes Atlas 2013, India ranks second in the world in terms of the most number of diabetic people. Bhikhiben Prahaladbhai Bajaniya (47)has developed a medication to treatdiabetes.

Bhikhiben is a housewife; she takes care of household jobs and assists her husband in agricultural activities. She is also associated with local anganwadi. Her husband has six bigha of agricultural land. The couple has two sons and three daughters.Allthe daughters and one son is married while the younger son is studying in tenth. Bikhiben has an inclination for social service and is always ready to help others in need. Her husband is also very supportive of her.

About a decade or ago she was diagnosed with diabetes. Bikhiben got really scared as someone told her that it was a fatal and an incurable disease. She consulted her family who suggested going for allopathic treatment. As she was aware that allopathic treatment has its own share of side effects, she got further worried and decided to opt for an alternative treatment. While discussing with her family members, she came to know about a herbal medication used by her paternal aunt late Siviben Karsanbhai Bajaniya. While the knowledge about the medication was available, there was no one to actually confirm that the medication worked. Despite opposition from her family, Bikhiben decided to go ahead.

She tried the herbal medicationand found her condition to improve within a month. She continued using it and controlled her diabetes considerably. She then started giving the medication to others as well. Many people have benefitted from her medications.

In the diabetic condition, body fails to produce enough insulin or cannot use insulin effectively.This causes glucose levels in the blood to rise, leading to symptoms such as increased urination, extreme thirst, and unexplained weight loss, etc.

In the diabetic condition, body fails to produce enough insulin or cannot use insulin effectively.This causes glucose levels in the blood to rise, leading to symptoms such as increased urination, extreme thirst, and unexplained weight loss, etc.

Depending upon the medical condition, Bhikhiben administers 25-100g seeds of a local herb (name withheld due to IP reasons) orally with water once a day for a period of one month initially. NIF facilitated the validation of her practice for anti-diabetic claim at Shri B V Patel Pharmaceutical Education and Research Development Centre, Ahmedabad. It was observed during the tests that the animals treated with the medication showed significant reduction in blood glucose level as compared to the diseased control. No other changes were observed in biochemical, physiological and behavioral parameters at the given dose, which confirms the safety of the drug. Further research will be facilitated ensuring all mandatory provisions/ requirements are fulfilled.