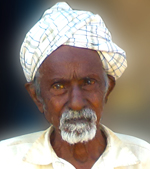 Diabetes is condition where the blood sugar level remains high for a prolonged period of time. Thakor Makvana Panchabhai Virabhai (80) is aherbal practitioner who has developed a herbal formulation to treat diabetes.

Panchabhai Virabhai was born in an agricultural labourer’s family in Banaskantha district. His family had migrated to their present place of stay in Patan district when he was 17years old. Through his hard work, Panchabhai has been able to own ten bigha of agricultural land now, which he maintains with the help of his sons. Of late he has been taking off from agricultural activities and concentrating more on herbal medications, where his family especially grandchildren also assist, both in collection of herbs and preparing the medication.

About two decades back, Panchabhai recalls, a friend of his approached him with problem of frequent urination, increased thirst and weakness. As he had knowledge about herbs and their uses, he prepared a medication, which was not too effective. He tried many combinations and after a few modifications was able to prepare a herbal formulation, which could control the condition. When the news spread, many people with similar symptoms started to come to take his advice and medicine. Over the years he claims to have treated hundreds of people using the formulation. He does not charge any money for the medicine and considers it as a service to humanity. His wife, till she was alive, helped and supported him in preparing the medicine. Now he is assisted by other family members in doing so. He feels that his medicine should be tested and incorporated in the formal medicinal system so that maximum people can be benefitted.

Diabetes is a metabolic disease where the person has high blood glucose level. This may either be due to inadequate insulin production, or due to the body cells not responding properly to insulin, or both. People with high blood glucose level have the urge to urinate frequently, feel thirsty and hungry. Panchabhai Virabhai administers the extract of a local herb (name withheld due to IP reasons) with water to diabetic patients twice a day till he gets cured. Generally, if the condition is not in advance stage, relief is obtained within a month or two.

NIF facilitated the validation of the herbal medication at the Shri B V Patel Pharmaceutical Education and Research Development Centre, Ahmedabad. During the tests, it was observed that the animals treated with the herbal medication showed significant reduction in the blood glucose level when compared to the diseased control. No other changes observed in biochemical, physiological and behavioral parameters at the given dose, which confirms the safety of the drug. Further research will be facilitated ensuring all mandatory provisions/ requirements are fulfilled.