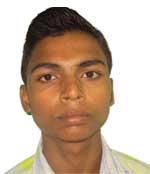 Gas leakage, poor handling of cooking gas appliances are known to cause horrific mishaps.Nilesh's idea is of a gas lighter, which can sense and indicate gas leakage before it is lighted, thereby preventing accidents. According to the idea, if there is a gas leakage, the lighter would not switch on and give out a siren, instead.

The idea occurred to Nilesh when he got news of a neighbour being badly burnt due to cooking gas leak. "That is when I thought of a lighter, which would not light up if there is a gas leak and thus prevent accidents," says Nilesh, who wants to be a mechanical engineer and create innovative products that are useful to people.

His hobbies include playing football. "I belong to a financially weak family but I am focused onstudying well so that I can grow up and serve the country," says Nilesh, who is inspired by the life of Dr APJ Abdul Kalam.

However, Nilesh was not a bright student earlier. Recalling an incident that motivated him to study harder, Nilesh says, "Once my friends and I bunked school and went for a movie. Later when my father came to know about this, he was very angry. That day onwards, I decided that I will focus on my studies and stopped wasting time. Today, my parents are very proud of me for having won this award," says Nilesh.