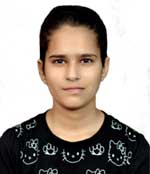 An idea of litmus paper like paper, which can distinguish between artificial sugar and natural sugar.

Neha used to hear her parents talk about how fruits were artificially ripened using harmful chemicals. Once during chemistry class, when she used pH strips or litmus paper to distinguish between acids and bases. It then struck her that she could do the same experiment with fruits to determine whether they are naturally or artificially ripened.

Neha then made a paper, which looked like a litmus paper, to distinguish between artificial sugar and natural sugar.

"This test can be done when you buy fruits from the market. Initially, I did not share my idea with anyone but when my teachers came to know, they encouraged me a lot. I want to develop this idea further," says Neha, who calls chemical experimentsin her school laboratory as her hobby and loves listening to music in her free time.

Nehalooks up to her chemistry teacher, Mrs.Monia Jain, as her role model and wants to grow up to be a chemical engineer. "I plan to work in India and for the people of my country. I hope my experiments willmake a difference," says Neha, whose father is an electrician and mother is a homemaker. She has two younger brothers.