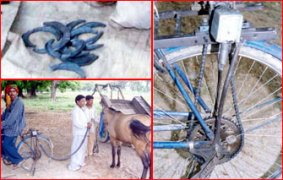 Mohammad Idris (34) hails from Hasanpur Kalan near Meerut in Uttar Pradesh. He has studied up to fifth standard and started his career as barber, his family profession. On the advice of his uncle, working in Babugarh army stud farm as a horse clipper, he shifted to horse clipping profession, as it paid better. Idris also manufactures horse accessories. At present, he lives with his family comprising of his father, mother, three brothers, wife and two children in his own house.

Genesis
Horses, mules, sheep, camels need to have their hair/wool cut regularly. Many owners have difficulty in getting this done as the electric/motor powered shear units are expensive and far and few in the towns. In addition, hand shears do not achieve uniform cutting action. Given the high pollution levels and the costs of running a motor for shearing, the need for an equally effective and a low cost alternative has been felt nationwide.
Mohammed Idris has about 20 years experience in the horse clipping profession. At first Idris used the horse clippers supplied by another company. But those machines were quite expensive to maintain. Slowly he started repairing these machines and then he got the idea of upgrading it to an automatic mode. At first, he developed a motor operated model and later the present bicycle operated model. Currently he is working on a mechanized hand held horse clipper, which would be driven by a hand-held grinding machine. He first developed the technology and sold his piece to people in Pilibhit, Bareilly. Till date he has sold about 40 machines. But many others have copied this design and similar devices are available in the market.
Idris has developed a bicycle -powered horse shaver in which the power of the bicycle rotary drive is transferred via speed cable to the clippers to cut the hair. The main parts of this device include the shaving head, the speed cable and the chain and gear mechanism. This bicycle operated horse shaver needs no electric power. Two people are required to operate it. One person (usually the horse owner) pedals the cycle in standing mode, while the rotary action of the wheel is transmitted to the hand blade unit of the shaver. The Bicycle Operated Horse Shaver removes the drudgery of combing, sorting, gradual cutting and giving final touch of the animal’s hair, which takes hours when done manually.
This unit can thus be used in areas without electricity thus making the owner self-reliant in doing this essential function, while retaining the basic functioning of the bicycle. This is a detachable arrangement whereby the bicycle can be used as usual without any problem after detaching the chain that drives the speed cable. He has made four prototypes of which three have been sold at Rs 1000 each (used units). A new unit costs him around Rs 3500, including a new bicycle.
Advantages
The novelty of the machine lies in its portability. The shaver does not have to carry additional equipment for horse shaving, since the unit is mounted on the cycle itself and can move along with the user. The most important aspect of this machine is that it runs on human energy and that it can be used on horses, camels, dogs and with some modifications on sheep. An efficient device, it cuts the hair of one horse in 30 minutes compared to one hour by manual cutting. The other shavers, which run on electric power or motor, have higher operating costs than this.
Target Consumers and Market Potential
The main users of the Bicycle Operated Horse Shaver would be the shavers, who cut the hair of horses, camels, dogs and sheep. A survey was conducted in Malpura, Delhi, Pilibhit & Meerut among respondents whose occupations varied from Tonga Drivers, to Horse Shavers. Officials of the Centre for Sheep & Wool Research Institute were also contacted. The majority of the respondents were not aware of such a device - except for some in Pilibhit and Meerut- though all were aware of at least one variation of the horse shaving device such as the manual shearer, handle operated shearer or motor shearer. Most of the respondents endorsed the need for automation and felt that the innovation would reduce drudgery. This novel horse shaver thus has huge potential in rural areas where there is paucity of electricity or any other forms of energy. NIF has sanctioned Mohammed Idris a sum of Rs. 25,000 from the Micro Venture Innovation Fund for the product development and demand estimation of the bicycle operated horse shaver.
According to Dr V.K Singh, Director, Central Sheep and Wool Research Institute (CSWRI), (Avikanagar, Rajasthan), the Bicycle Operated Horse Shaver can be used in its present form (i.e. without any modifications) on camels and on marwari sheep also whose hair are coarser as compared to that of ordinary sheep and with some modifications it can be used on ordinary sheep also.