Price :   Rs.5,50,000 and above (ex-factory price + packaging). The price does not include transportation costs, taxes, etc.

Delivery Period : 15 days, Innovator is offering free maintenance and repair service in Gujarat for one year. 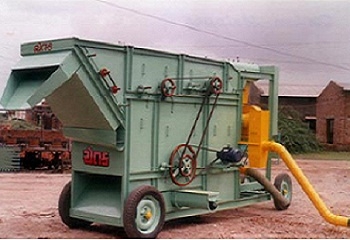 Mansukhbhai (50 years), born in a farmer family started lending a helping hand to his father in various farm-related works, particularly related to farm machinery. He pursued studies up to high school. As a child, Mansukhbhai had great interest in mechanical and electrical appliances and he would tinker with these whenever he got an opportunity. This interest brought him in close touch with an electrician friend whom he assisted in his spare time.

In 1973, his uncle got him a job as a helper in a steel tube manufacturing company at Ahmedabad. He ran errands for the maintenance fitters and electricians for several months and gradually picked up the skills and knowledge. Eventually, he was appointed as an electrician. Further, his career progression was smooth albeit in different companies. His last job was as Deputy Electrical Engineer in Asarva Mills Limited.
Mansukhbhai resigned his job two years ago and started concentrating on business on full time basis. However, he has to avoid too much of running around due to his failing health. At present, his brother-in-law, his sons and nephews are managing the manufacturing activities as well as marketing of the machines. He has virtually retired from day-to-day management of the unit and confines himself to planning the long-term strategy for product-market development. He recalls that his wife did not approve of their sons abandoning their college studies to join him in his "crazy pursuit." She would often quarrel with him and insist that a steady income was essential for running a home decently. She has stopped nagging for the past couple of years and has apparently come to terms with realities. She has apparently started deriving pride in her husband's achievement. She makes it a point to ask her daughter-in-law to show the latest brochure of the machine when someone happens to enquire about the status of this "crazy pursuit".

The idea of mechanising the process of stripping rainfed cotton (Variety No.797) from shells came to him during one of his frequent visits to his village. He kept mulling over the idea for several months. In 1991, he was convinced that mechanisation of the process of stripping the cotton lint from partially opened bolls was not an impossible task and that he could develop a machine to carry it out. He discussed this idea with his colleagues and relatives. They were very enthusiastic and encouraged him to go ahead.

Kantibhai Patel, a factory manager with Trent Group Cooperative Cotton Shelling Ginning and Pressing Society Limited, promised to invest in the research and development work involved in fructifying the idea. So enthusiastic about supporting the venture was Kantibhai that he parted with a hefty sum of Rs 1,50,000 to cover the initial establishment expenditure.

With this money Mansukhbhai rented a shed close to the cotton-processing mill and acquired some basic machinery with this money. Several colleagues of his, and the workers from the factory volunteered to assist in the development of the machine. They used to spend several hours every evening after their regular duty hours in discussing and trying out alternatives.

It took two years of dedicated efforts to come out with the first model. Mansukhbhai designed, fabricated and demonstrated his first full-fledged cotton-stripping machine in 1994. The demonstration in his village convinced everyone that it was indeed possible to mechanise the tedious process. At the end of a meeting organised after the demonstration of the machine, he found himself flooded with confirmed orders for as many as 50 machines. This was despite the performance not being as good as Mansukhbhai wanted it to be.

The actual supply of machines was easy. Although the customers had been quite impressed at the time of demonstration, the performance under actual working conditions did not satisfy users. All the machines were returned back with complaints. It was eventually found that the malfunction was due to a trivial technical problem. He had to refund the money received and he suffered a severe financial setback.

Mansukhbhai would not give up. He felt that the overwhelming initial response received from prospective users obliged him to somehow justify the confidence they reposed in him. He intensified his efforts at perfection. He shifted the workshop from Ahmedabad to Nana Ubhada at his brotherin- law’s place to save on rent. Mansukhbhai began visiting Nana Ubhada once or twice a week. Jayantibhai and his family members devoted whatever time they could find for the project. Other relatives too chipped in over a period of time.

The first prototype was developed way back in 1994 and he could develope the final model in 1996. Mansukhbhai made more changes to the machine over a period of three more years. Last year, he introduced dust collectors and fitted an automatic feeding system to the machine. He also provided wheel-brackets and castors to make the machine portable. Mansukhbhai has manufactured 35 machines so far costing about Rs three lacs each.

Mansukhbhai’s stripping machine innovation was scouted by SRISTI. Grassroots Innovations Augmentation Network (GIAN - West), took up the task of value addition. Mansukhbhai was put in touch with Council of Scientific Industrial Research (CSIR) and other arms of Department of Science and Technology (DST). With GIAN’s support, Mansukhbhai could secure a Rs 5,80,000 under Technopreneur Promotion Program (TePP). GIAN-W also arranged for technical assistance from National Institute of Design (NID), Ahmedabad. A German student pursuing his studies at NID systematically worked for six months on the design of the machine and provided some valuable inputs. Faculty from IIT-Mumbai also gave suggestions for design improvement.

This stripper saves cost involved in manual labour and eliminates drudgery for women and children. It processes 400 kg cotton per hour. It improves the quality of cotton. The machine is available in two models. It is available with suction feed as auxiliary attachment.

At present the national patent has been applied for and the international patent application is under process in United States through the efforts of SRISTI, NIF and GIAN- West.

Innovator has been awarded National Award by National Innovation Foundation in 2002. He has also received Best Technology Award for the year 2003 by National Research Development Corporation, Govt. of India in 2004. Innovator has sold more than 600 machin