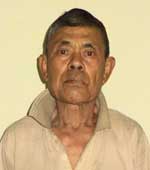 Deben Singh is the eldest of twelve siblings. His father was government jeep driver while his mother was a housewife. As a child he had a lot of interest in making toys and models of aeroplanes. He was quite athletic as well and actively participated in various sports events like football, volleyball etc. Since he had a large family, his parents could not support all of the siblings properly, finance was a big concern for them. As a result, he could study till class seven only. Initially he started his career as a jeep driver, like his father but due to frequent long distance travel, he settled down as a blacksmith making biomass stoves, dryers and other household use items. He has been in this business for over thirty five years now. In his family he has his wife, his son, his wife and a grandchild.
Genesis
In his long career as a blacksmith, Deben Singh has made a number of biomass stoves and dryers, of different sizes and capacities. The idea developing Cooking cum Drying Biomass Stove struck him while he was participating in the Innovation Exhibition at the Rashtrapati Bhavan in 2013 where he was awarded for his Emoinu stove. During the demonstration of his biomass stove on top of a table, he noticed the area beneath the stove slightly charred due to the heat emanating from the bottom of the stove. It then struck him that he could tap this heat and use for drying food material. After the exhibition he started working on the Cooking cum Drying Biomass stove and took about six months to develop an operational prototype where both cooking and drying of fish, meat, vegetables etc. was possible simultaneously.
The stove was designed in accordance to the traditional food preference of Manipur, Nagaland etc. where people dry various items like fish, meat, certain vegetables etc. over the hearth. The dried items get the flavor of smoke. However, with introduction of LPG based stoves, cooking pattern has changed, now people use separate biomass/charcoal dryers. Drying fish/meat over the LPG stove is not preferred as the dried items neither have the flavour nor the taste as in the traditional process.

This is a wood charcoal fuelled cooking stove with a number of drying trays below the gas top, to dry various food items. The stove is a self-standing one, which also serves as doubling as a work place having a work platform at a height of 75 cm from ground and measures around 60 cm x 90 cm. Two cooking stoves have been provided at the top and a third one for drying purpose at the bottom in the centre.
The stove emits very less smoke and also dries the food items effectively. As the entire system is made in galvanized sheet metal/aluminum, upon use it gets warm and dissipates the heat to the surrounding, keeping the room warm as well.
The stove has been tested at IIIT, Manipur, Imphal where the system was found to be more efficient than available charcoal burning chulha. This possible because the air used to burn the charcoal comes through the enclosed box, where it gets preheated. So some part of waste heat gets recovered and hence the efficiency of the cooking stove cum dryer is about 10 % more than the conventional system. The air intake to the stove is regulated through proper vent system and depending upon the type of food cooked can enhance the fire or reduce the burning of the fuel. For ease of circulation, a small fan has also been incorporated in the system. IIT Manipur has suggested modifications in the cooking stove cum dryer to make it more efficient and user friendly.
Over the years Deben Singh has participated and displayed his stoves and dryers in a number of exhibitions and fairs at state, regional and national level. He has also received a number of awards for his contribution in development of useful technologies and skill development. Recently, Department of Commerce and Industries, Govt. of Manipur has allotted him a permanent work shed at an Industrial Area in Imphal where he would now get uninterrupted power supply, which will help him scale up his production. NIF has also supported him through its business development grant and recently through the Micro Venture Innovation Fund (MVIF) for scaling up his business. The rights of his for Innovative fish dryer and Emoinu stove have also been acquired under Grassroots Technological Innovation Acquisition Fund (GTIAF) by NIF for wider diffusion. Deben Singh is also planning to impart skill development training to interested local youth so that they can work with him or start their own enterprise.