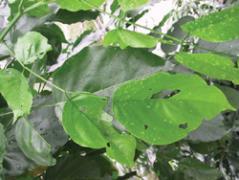 Takhatsinh Dalpatsinh Patel (31) hails from Dhamai, Panchmahal, Gujarat. He has passed his Higher Secondary. Takhat sinh earns his living through farming and animal rearing. His family consists of his parents, three brothers, his wife and his son. His father works as an electrician with the signal department of Western Railways. All the members of his family are educated upto the higher secondary. The family has five acres of land of which two are irrigated. Takhatsinh does a lot of experiments in farming and is passionate about his experiments.
Genesis Takhatsinh had learnt of the medicinal qualities of karanj from his forefathers. His forefathers used the leaves of ‘karanj’ for toothache and Takhatsinh observed that the plants of ‘karanj’ and ‘arni’ are never attacked by aphids and so the idea of using these plants for making this pesticide came to his mind. Other farmers in his village have also learnt this practice from him and are using it. But according to Takhatsinh due to irregular rainfall for the past three years, cotton farming has decreased in this area and hence the above pesticide is used less as compared to before.
Symptoms of the pest attack
Aphids that attack the cotton crop are one of the major sucking pests in cotton. These pests suck the liquid from the leaves and cotton boll of small plants and thus restrict the growth of the boll and the plant as well. Crop production decreases and there are chances of crop failure.
Field trials Field trials were conducted in Khodiyar village near Sarkhej Gandhinagar highway, Ahmedabad by the Sadbhav SRISTI Sansodhan Laboratory to find the effect of the filtrate of Clerodendrum phlomides and Pongamia pinnata for control of pests in cotton. The filtrate was sprayed in the morning in three replications with a hand operated knapsack sprayer using a recommended spray volume on cotton. The effect was observed in the field at different time intervals. This trial was also done on bean crop. Approximately 50% control of aphids was observed in both the crops.
Leaves of karanj (Pongamia pinnata- 2kg) and leaves of arni (Clerodendrum phlomides-2kg) are chopped into small pieces and then boiled in five litres of water in a closed vessel until the decoction is reduced to two litres. After the decoction is cooled down it is filtered and used. For spraying on one acre crop of cotton, one litre decoction is mixed with nine litres of water and sprayed on the crop in the evening as spraying in the evening gives better results. In case of major pest infestation, the pesticide is sprayed at an interval of five days.

Due to the use of this pesticide, crop production increases and the quality of the cotton fibre also remains good. In addition, this pesticide has no side effects and it is a low cost alternative.