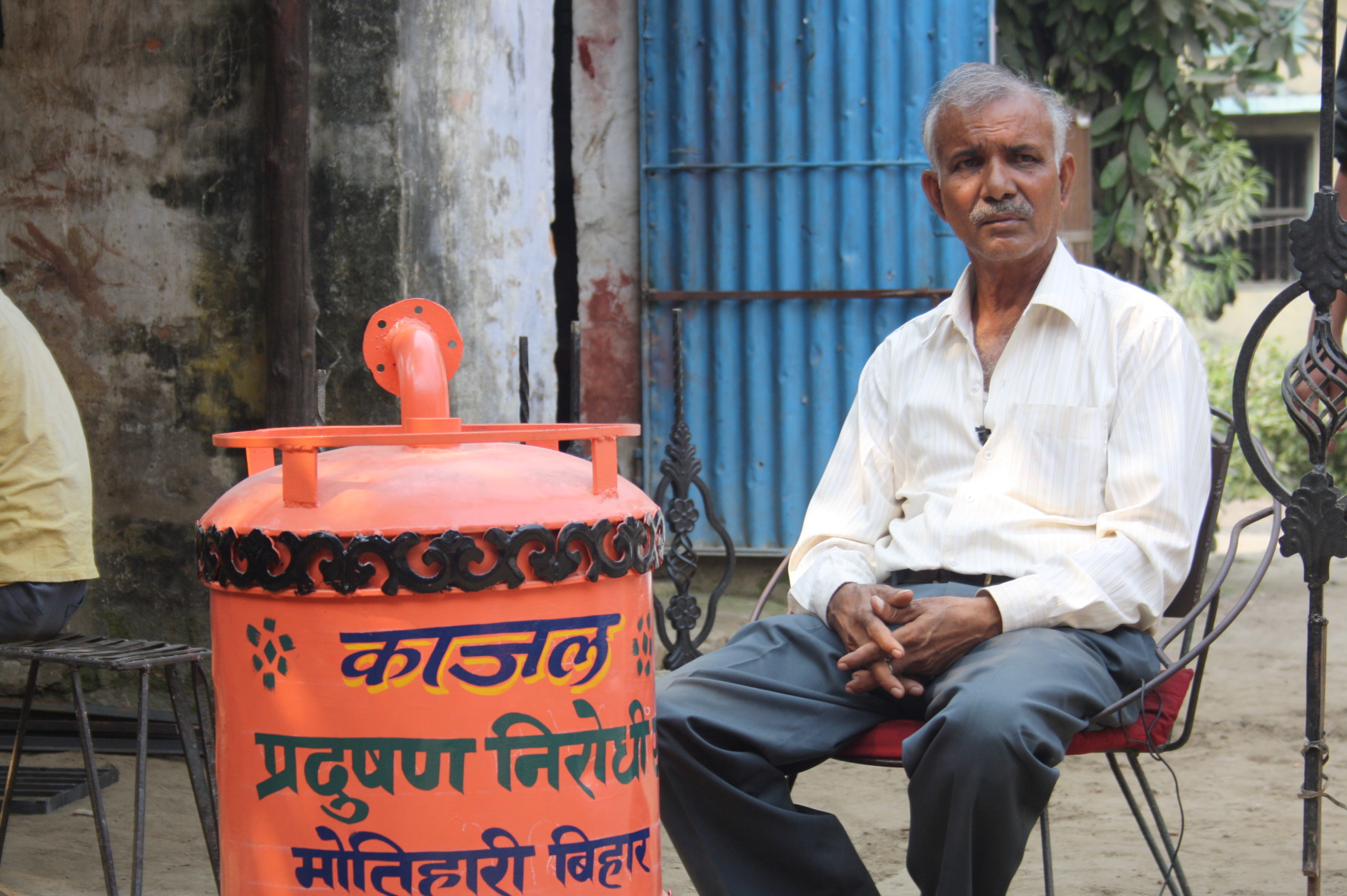 (Hard work is everything. Be honest, initially there would be problems but success will eventually come if there is a firm desire to succeed)

There are absolutely no generators/gensets in the country that have a pollution control device attached to them. Even, there is no requirement for the same under the present rules. However, Virendra Kumar Sinha (58), a self-taught welder and fabricator, has made a pollution control device for gensets. This attachment precipitates the suspended particulates present in the exhaust gases making it clear along with reducing its temperature.

From a Playful Childhood to a Struggling Career

Born in a middle class family in 1950, Virendra is the eldest of six siblings- two brothers and four sisters. Unlike his siblings, he was never interested in studies. But, being the eldest, he was not scolded and was in fact quite pampered. Apart from football and marbles, he would often play with wires and electrical gadgets. He was always restless and inquisitive. Growing up, he started repairing sewing machines, air pumps, bicycles etc. for the family and neighbours as well. Though his siblings continued their studies, he could not clear the class 12 exams and took admission in an ITI course.  However, he had to leave it midway to attend to his family duties. He started his career as a road and building contractor in early seventies. Thereafter, he started cloth export to earn more but soon had to close down, as it also did not fetch him a steady income.

Pondering over various options, he decided to assist his friend in his fabrication workshop. Gaining exposure in the field for close to a year and a half, in the early eighties, he decided to move on to set up his own fabrication unit for manufacturing iron gates and grill works with a small loan from a bank. Struggling initially in the first six-seven months, he started networking with the local hardware storekeepers to get orders. He recounts that during this period his deceased friend Bachchubhai was a great support, as he always encouraged him to persevere. His workshop was in Motihari town, but with low income and high rent, he had to shift to his house in Belwana village, two kilometers away from it.

His fabrication unit, Kaajal steel, named after his elder daughter, made slow but steady progress over the next twelve-thirteen years. But around 1994, a difficult phase started when his firm had to face fierce competition from other workshops. To keep himself in the competition, he started innovating designs for gates and grills and kept their prices close to the older ones. Also, to maximize returns, he retained more skilled workers and increased their wages, relieving the rest. Gradually, things improved and today he is in a much comfortable position.

Just opposite to a school, Virendra operated his fabricating workshop in his home, in a congested colony. He used a diesel genset (generator coupled with stationary engine) as an alternative to the erratic electricity supply. The problem was that the genset made a lot of noise, released considerable smoke causing pollution and also disturbed the children. But neither the school nor the workshop could be moved away.

Virendra had to face hostile neighbors who went to court over the high decibel noise and pollution from the generator used in his fabricating unit. The SDM and court authorities also asked him to either solve the problem or close down his unit. With his limited resources, he could not relocate the unit. Resolving to settle the issue once and for all, he thought about designing an attachment that would drastically minimize the noise as well as the smoke. While pondering on how to build the device, he remembered the science teacher of his school mentioning- “When we make a noise in a closed room, its effect on the people outside is much less than when we make same amount of noise in open public space”.

He then decided to experiment and build a special chamber to muffle the sound and break down the exhaust components. Using commonly available materials such as an iron drum, perforated iron pipes, steel channels, baffles and soot collecting tray, Virendra built the first prototype with multiple muffling chambers. It cost him Rs. 4000. This unit was fitted to the 10 HP engine being used in his workshop. This resulted in considerable noise reduction. Over a period of eight months, he continued to invest and experiment and finally made a device that reduced the noise further. So much so that some of his neighbours even came to inquire if all was well in his workshop. The emission also reduced but not to his satisfaction. He continued to improvise and after for about a decade gave the machine its present shape, which matched the level of perfection he was looking for.

Apart from his compassion towards the children and the environment, the court judgment against him in response to the protest by neighbours also led him to develop this device,

This is an accessory that is attached to the genset. It precipitates the particles of the flue gases, lowers their temperature and also dampens the noise considerably.

The attachment consists of a cylindrical drum having concentric perforated screens and a few long perforated tubes having equally spaced mesh linings. Fins have been provided on the internal surface of the cylinder for breaking the sound waves. The cylindrical drum, weighing 65 kg, is placed between the generator and the exhaust pipe. The exhaust gases, which enter the unit, strike against the array of protruding fins and perforated tubes continuously. The vortex results in the dissociation of CO and CO2 into carbon particulates and oxygen.

The innovation also works as a silencer by internally canceling out sound waves as they pass through a series of concentric channels. The geometry and construction of the unit also delivers removal of carbon-based effluents as soot and solid deposits. The exhaust gases, which come out eventually are very clean and leave no trace of carbon on the leaves of the tree growing nearby. The unit functions as an attachment, not only for precipitating carbon particulates from the flue gas and damping the sound, it also reduces the temperature.

On an average, after 3000 hours of engine operation, the innovator removes about 5 kg of soot using the chute at the bottom of the drum. In about six to eight months, it collects 12 to 14 kg of carbon, which can be easily taken out from the opening at the bottom.

The innovativeness of the machine lies in its design and construction. The variation in geometries, zonal volumes and pipe segments create “area discontinuities” which act as an impedance mismatch for the sound waves to travel further. Secondly, there are the multiple reflections of sound waves internally, which cancels them out.

Testing of the device was done with 5 BHP Kirloskar engine under different loads in BIT Mesra, Ranchi where reduction in CO and CO2 up to 30 % and considerable reduction in temperature was observed. NIF has filed a patent (1520/KOL/2008) in the name of Virendra Kumar Sinha for this innovation.

Other solutions in the domain

Prior art discloses various methods such as catalytic filter scrubbing using catalysts, scrubbing with diluted basic solutions, scrubbing by water i.e. use of water as an absorbent, scrubbing by any undisclosed liquid, catalytic systems including fuel reformers and after treatment systems, such as the selective catalytic reduction (SCR) of NOx under oxygen-rich conditions.

Other methods include ozone injection and absorption–reduction technique for removal of sulfur dioxide and nitrogen oxides, reaction with N radicals for reduction of NO in the exhaust gas, braided wire damper for noise reduction, electrostatic precipitator for attracting particulate matters in an exhaust gas, treatment of flue gas by electron beam for simultaneous removal of SO2 and NOx.

Akasi from Sivakasi, Tamil Nadu had developed one such device (an environmental friendly oil engine with a modified silencer that reduced sound better than other silencers) way back in 2000. He was awarded in NIF’s First National Grassroots Innovations Award Function in 2001. Having compared with other designs in prior art, it is evident that the construction and design made by Mr. Virendra Sinha is unique.

Azhar Hussain Ansari, his scout as a fabricator, knew Virendra Sinha. After returning from NIF’s Third Award Function at Ahmedabad in 2005, he met Virendra once. Sipping tea at a roadside shop, he narrated about his visit to him and mentioned about NIF. During the ensuing discussion, he came to know about the work done by him, which was later documented and sent to NIF.

Though Virendra had to pass through many ups and downs in his journey of innovation, yet he never let any of his tensions, stresses or frustrations spill over to the family. The only person with whom he shared everything was his wife, Sudha, who stood by him in every test and supported him to the hilt. He wanted his three children, Kaajal, Priti and Vivek to study and do well. He did not want the adverse conditions to have any affect on their young minds and together the couple tried their best to make it appear as if everything was normal. Together, they have bailed out the family from tough times to a position of relative comfort. His elder daughter has been married and the younger daughter and son are studying.

During the 22nd Shodh Yatra (journey through rural areas in search of local creativity) in Bihar, in December 2009-January 2009, the Shodh Yatris visited his workshop and appreciated his work. He was also felicitated the next day at the Gandhi Memorial, Motihari for his ingenuity.

Virendra has received several queries from companies but so far he has not found the right party and the price to license the technology. Most people are bound to use engine generator sets. As an accessory to engine setups, this attachment holds promise for universal use to remove noise and deliver cleaner exhaust.

Many hotels and business establishments, which use generators, have come forward with enquiries for this effective low cost solution. The extensive carbon deposits collected periodically can be reused as raw material for shoe polish and local small-scale industry units. Large numbers of workshop mechanics use such engines, which create both noise and air pollution and yet there are not many examples of such devices.

Virendra is now working on to fine tune the device so that it can be fitted to any generators/gensets from 5 kVA to 14 kVA. He is also trying to keep the cost down, to enable its maximum usage. He proudly says, “Pehle ye kaam pet ke liye kiya tha, ab ye desh ke liye kar rahe hain” (Earlier I had to do this for survival, now I am doing this for the country).