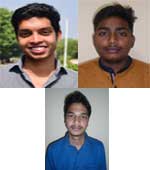 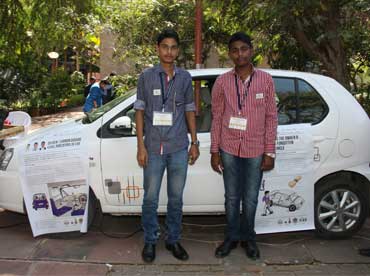 Pratyush (18) and Bikash (19), and SR Valava (20) were studying in class 10 and 12 respectively when they suggested this idea. All the students thought about this idea after reading/ hearing news about accidental deaths in cars due to suffocation.

Valava, who plays football, has interest in junk art i.e. making useful items from waste and wants to become an entrepreneur so that he can give job to others. He believes that one should apply knowledge of science in daily life and should not be too dependent on technology especially those which are for comfort. He is presently pursuing BE Metallurgy from Coimbatore.

Pratyush plays basketball and computer games. He also reads story books, paints and plays keyboard and wants to become an IAS officer. Both his parents are government officers. As a child he participated and won in a number of science competition and sports. He is currently pursuing his bachelor’s in engineering. Meeting Dr APJ Abdul Kalam at NIF’s IGNITE award function has been his most unforgettable moment in life thus far.
Bikash, who also plays basketball, believes that he has the capacity to break a bigger problem into small ones and then solve them. His father is in government service while his mother is a housewife. His other two siblings are students like him. As a child, he invested a lot of time in extracurricular activities and won many prizes in elocution contests at school level, represented state in basketball, won an award in an international science exhibition at Visakhapatnam. He has also been the East zone cluster gold medalist in basketball. He also aspires to be an IAS officer and feels that, ‘success is not something one is born with, rather it is something one has to strive for.’­­­­ He is currently preparing for engineering entrance exam after completing class twelve.