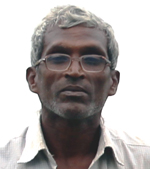 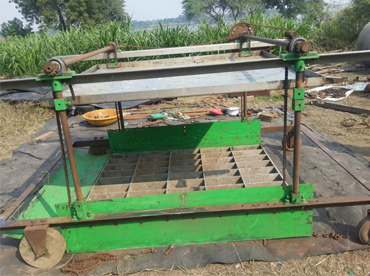 Chandrasekhar (53), a landless labour, who has worked in brick industry since his childhood has come up with a low cost manual operated brick making machine to reduce drudgery in the process.

Chandrasekhar was born in a farm labourer’s family. He had to drop out of school after class third due to a TB infection and never returned back. Poor financial conditions of his family necessitated him to work. Since then he has worked as an agricultural labourer, porter, and in brick making industry, where he has spent the longest period of time. Despite economic hardships, he has tried to be creative and innovative all his life. He has made a manually operated sugar cane crusher and manually operated neem oil extractor. He is married and has three children.

In brick industry, the tasks are assigned on a gender basis. Men are engaged in bringing raw material while women are engaged in making bricks by sitting on a small piece of stone as a chair. Sitting in a squatting posture and working often causes exposure of women’s body parts sometimes leading to harassment in a mixed gender working atmosphere. Witnessing many such occasions, Chandrasekhar decided to make a machine to reduce drudgery and to enable brick making without the requirement of sitting. He designed the machine without power requirement so that people do not have to rely on electricity for their work. Frequent power cuts in the villages would not have helped if it was an electricity operated machine.

Chandrasekhar recalls that in the initial stages of development of his innovation, there was no one to support him. Gradually his family realized the significance of the machine and started to encourage him. However, he expresses disappointment at the response of the society for his initiatives. He tells that people suggested him to look for work to earn money rather than develop a machine. When he was able to make the machine, people still thought why a labour is trying to become a scientist and not do what he is supposed to do. Without any financial support from anyone, slowly he could manage to make a prototype of the brick making machine on his own. But then the bitterest experience of his life happened. The prototype was stolen by somebody. As he had put all his resources to make the prototype, he did not have any money left to make another one, making ends meet was already difficult. During this time, Chandrashekhar appreciates the support provided by Palle Srujuna, which was followed by support from NIF as well to develop the prototype.

This is a manual brick making machine, which has mechanised the process of moulding, removing excess mud and pressing enhancing the productivity.

This machine can be operated by standing thereby eliminating the requirement of continuous sitting in awkward position. The device has been designed in such a way that apart from reducing the drudgery, it can also increase the productivity to almost three times the conventional method. It can make fifty bricks at a time as compared to other brick making machines, which make 10-15 bricks at a time. In the conventional method, a team of 6 people can make 1500 bricks in 8 hours, which gives them earning of Rs. 1000-1500. This machine also requires a team of 6 labourers for its operation however, high productivity of machine helps them to earn more income i.e. Rs.4000-5000 in 8 hours’ time. Another social advantage of the machine is that due to its design, child labour cannot be involved, which is quite common in brick making industry.

The first prototype developed by him weighed about 300kg, which he has worked upon and reduced to 120kg in his second prototype. Chandrasekhar is still modifying the machine and trying to reduce weight and improve efficiency further so that it can then be given to people for their livelihood generation.