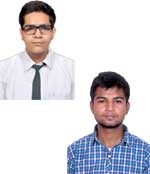 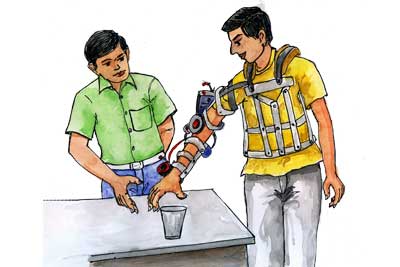 Ayushand Arnovhave designed a mechanical exoskeleton or a body suit that can provide support to a physically disabled person or aid orthopedic patients. The suit supplements the upper skeleton system, thereby providing support during movement.

The duo would often visit har-ki-pauri in Haridwar to participate in Ganga aarti. During those visits, they would see a lot of physically handicapped beggars, mostly those without arms. This sight moved the students, who decided to help them in whichever manner possible. Later, while watching an English film, Iron Man, the students came up with the idea of developing an Iron Man-likerobotic suit, which would help the beggars lead lives like normal people and become independent.
The students used recycled materials, motor parts and other scrap to make the prototype.
“In our innovation, the upper and lower arm is connected with a lever, which is connected to a pulley that rotates the arm.It is a very simple mechanism but hopefully, will be useful to people,” saysArnov, who developed the cost-effective model with his classmate Ayush during their vacation.Arnov likes to make cartoons and paint in his free time. He also writes songs and loves gadgets. His father owns a workshop of motor repair while his mother is a homemaker. He has a younger brother.
Both the students idolize the fictional superhero Iron Man and are inspired by the way he uses technology to help people.
While Arnov wants to become a mechanical engineer and an inventor, Ayush has set his eyes on robotics engineering. “I want to make different types of robots to make human life easier. I likeeverything related to robotics. As a toddler, I used to break my toys open out of curiosity about how the parts operated. My parents were concerned initially but now understand me,” says Ayush, who had earlier developeda robot soldier out of waste materialto be used in wars to prevent bloodshed.
Ayush’s father works with a PSU while his mother is a homemaker. His elder brother is pursuing mechanical engineer and is very supportive of Ayush’s innovations.