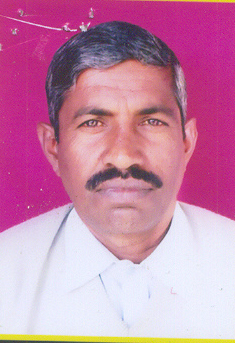 Delivery Period : One month after confirmed order with 75 per cent of the price as advance payment 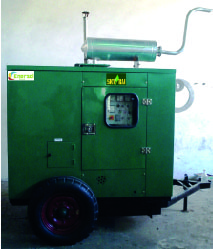 Rai Singh Dahiya (46) has developed an efficient biomass gasifier where he has changed the conventional design, especially of the filters and cooling unit to get clean gas, ensuring smooth operation of engine at low operational cost.

He is engaged in the repair of agricultural machines, pumps and allied machines. While he has had no formal education, he has gained knowledge on science and technology by dismantling and repairing gadgets, and exposure to radio programs.

Rai Singh was born in January 1963, to Sri. Ranjit Ram Dahiya and Smt. Manidevi, in the village Pili Madori, Haryana. Soon after his birth, his father left the ancestral village with his family and settled in the Thaldka village in Ganganagar district of Rajasthan. His parents started farming to earn their living and as Rai Singh grew up, he also joined them. While other kids went to school, Rai Singh was busy working as a farm hand and irrigating barren land, as that was the need of the hour. Missing out on a formal education, he made himself literate by studying his brother’s books.

Blessed with a keen mind and natural curiosity, he has tried to develop novel solutions. First, he tried to develop a sound alarm to be used in the field by setting off burning sulfur to scare animals and birds. Starting with a watch given by his brother, he dismantled and put together many objects and gadgets and sharpened his knowledge of components and systems. Being a regular listener to BBC radio for science programmes, such as “Gyan-Vigyan”, since childhood, he enhanced his knowledge of science and technology. This program motivated him to tinker and develop new concepts.

In 1979, he was working in the fields when the engine of a pump broke down. Instead of finding a mechanic, his brother asked him to fix it. He struggled the whole day but succeeded in setting it right finally. This gave him a new confidence and understanding about engines and their functioning.

His major innovation is the biomass based gasifier and engine. He also developed other ideas like foot operated valve, car running on battery charged by windmill, which uses vehicle motion to rotate the windmill blades.

In 1982, he set up a kiln for baking bricks with a capacity of about 12000 bricks at a time.  In this kiln, he observed that burning of wood and other fuel was also producing some gas, which was burning more vigorously. Later in 1991, he set up his workshop for repairing tractors, jeep, trucks and other engines. Looking at the increasing demand of diesel engines in agricultural sector, he modified it to operate on LPG as the cost of diesel was growing and operating it on LPG was economical.

When this experiment was successful, he wondered if it was possible to run the engine on the gas produced by burning wood instead of LPG. He decided to build a device to generate a gas to run diesel engines.

After a series of experiments, he finally developed a system, which consisted of a gasifier that could convert biomass into producer gas. The conventional diesel engine was modified by replacing diesel injector set-up with a spark plug and a fuel pump with a distributor set up. This gasifier could run the modified diesel engine, but for a very short duration. Rai Singh realized that the engine was not performing well due to the impurities in the producer gas fed into it.  He worked out several mechanisms, and filtering sieves, and then developed a filtering mechanism so that pure gas could be supplied to the modified engine.

Initially four such systems were developed and installed in the village and local people were trained to operate them. The latest unit of the gasifier system is capable enough to operate 40 hours continuously with reduced maintenance.

The unit consists of a gasifier, which generates producer gas from bio-waste and uses it to run an engine. The gasifier is conical in shape, compact in design and surrounded by a water jacket with the capability to handle multiple fuel sources.

Fuel wood or briquettes from agricultural residues can be fed to this gasifier.  The air inlet is provided at the bottom. The system has two stages for removing ash, charred residue and tar. The primary filter unit comprises a series of rows of filtration units; each series consists of a rod over which semicircular baffles having perforation are welded. Perforation becomes progressively smaller from the first to the third filtration unit.

The filter can easily be cleaned by pulling out the rod with the baffles. It is surrounded by a water jacket. The secondary filter has layers of different sizes of sieves ranging from 2” to very fine size, with the cleaning gate at the bottom.

First, the bio-waste is deposited in the gasifier unit from the top. This unit acts as a furnace and heats upto 200 degree centigrade to generate the producer gas. The gasifier is monitored and fed continuously for about first 30 minutes. Aspirator is turned on for sucking producer gas until the flame appears. Later, the supply of air from the bottom is cut off.

The producer gas is now passed through the first cyclone where water-cooling is done; the gas is cooled and partial cleaning is also achieved. The gas now goes through the second cyclone, which removes carbon and ash based residues. Now the gas passes through the filtration unit consisting of sieve grills and cloth. This cleans up the gas completely.

After cleaning, the gas is fed into the mixer unit, which mixes the gas with air in the right “fuel-air ratio”, which is set for the engine and power rating. There is a calibration mark for optimal ratio based set by the innovator, but the user can override that and choose his settings. Alternatively, the nature of the knocking sound, which changes at optimal ratio, can also be used as a cue for optimal mixing ratio setting. The fuel mixer then feeds the fuel-air mixture onto the modified engine, which runs on this clean fuel.

This biomass-based gasifier can process about 20 kilograms of bio-waste to run an engine of 30 HP for one hour. Also, the furnace in the gasifier unit can be built to different capacities as per availability of biomass and agricultural residue. Considering the cost of machine, fuel-biomass and local labor, this arrangement is estimated to cost less than half the cost per unit power when compared to normal electricity grids costing 4 Rs per unit.

Concept of biomass gasification[i], up draft gasification[ii], cleaning by cyclone filter[iii], and use of scrubber[iv] are well known in art. Prior art also discloses other such devices[v], however a compact gasifier surrounded by water jacket with the arrangement of two stage filters are not available in art. Accordingly, NIF filed a patent in Rai Singh’s name.

The biomass based gasifier can be used to operate pump sets in remote fields, lift water in homes, operate basic machines such as saw mills, flour mills and generate electricity by charging the alternator. While similar systems with various configurations are in use, the Government of India has dedicated renewable schemes for the development, installation and use of such biomass based systems.

The fuel consumption of Dahiya’s gassifier is reported to be 1 kg/kVA, which is claimed to be almost 30-40 per cent less than other available designs. The prices vary from Rs. 1, 25,000 for 10 kW unit to Rs. 3,25,000 for 35 kW unit. Rai Singh was supported from the Micro Venture Innovation Fund (MVIF) of National Innovation Foundation through GIAN North, Jaipur. As a result of which, he has been able to manufacture and sell over 50 units of varied capacity to farmers and owners of flour and saw mills. For his work, Rai Singh was also honored by Gram Panchayat in 2002 and by the District Collector in 2004.

[v] Fluidized bed biomass gasification system including a bulk biomass feeder, a variable speed pressurized pneumatic conveyor system, a high pressure feed tank / reactor vessel and cyclone filter (US5666890); gasification of liquid and/or fine-grain solid using a gasification agent, where heat is supplied by heat carrier particles (US5580362); methodology and apparatus to produce syngas, which is a thermal decomposed gas produced by thermal decomposition reaction of a liquid or solid fuel  and  high-temperature steam and air (US6837910); plurality of combustion chambers for efficient combustion (US7228806); gasifier suitable for large pieces of solid fuels, especially bales of biomass (US 70138169); Biomass gasifier and boiler for combusting gaseous fuel from the gasifier to produce useful energy (US 6871603)

There are lots of villages in the world which are still not electrified or are receiving power erratically. Given the limited global supply of fossil fuels, search for renewable energy has been on the top of the sustainability agenda. Biomass gasification, a century old technology, is viewed today as an alternative to conventional fuel. In gasification process, wood, charcoal and other biomass materials are gasified to produce so called producer gas for power or electricity generation. Mr Rai Singh Dahiya observed that the users of biomass gas (producer gas) as a fuel generally complain about choking in the engine after running for a certain period of time. He solved this problem.

The innovator has changed the conventional design of gasifiers specially the filters and cooling units to get clean gas and ensure smooth operation of engine at low operational cost. It is a down draft type bio- mass gasifier, compact and efficient system for converting Bio Mass into producer gas which is used as a fuel in running Diesel Engine by making little modification on engine. The Biomass is burnt in a furnace packed from all the sides and having one outlet to pass the gases to other chamber where these gases are cooled and then passed through the filter for filtration. This filtered gas is then feed to the engine, as a substitute to diesel or like other fuel, for its running.

Innovator has been awarded in Fifth Biennial Award Function from National Innovation Foundation and also supported under MVIF scheme of NIF.