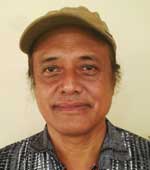 Moa composes originals, he sings and plays the guitar, the harmonica, the BamHum and the Tikzik (also invented by him). He has tried his hands as an actor, sportsman, audio and video editor and is an inventor of two versatile musical instruments. He along with his wife Arenla M. Subong founded the band Abiogenesis and developed a new world music genre called Howey, which is a fusion of modern rhythm with Naga folk tunes. Guru Arenla M. Subong is a well-known singer, musician, dramatist, script writer, composer and choreographer in Nagaland. Arenla is the vocalist and the lead BamHum player in Abiogenesis.

The seeds of Abiogenesis got sowed decades ago when Arenla and Moa met for the first time in Mokokchung. As teenagers involved in a rock band, they very soon fell in love, got married and by 23 years of age, were a family of 5 with 3 sons. Music remained an integral part of their lives and many years later, they decided to assemble their own band, the Abiogenesis, which is a folk-fusion act from Nagaland that creates indigenous and tribal music in the most exotic way. They do both vocals and instruments with the lyrics being in English. Every song has a meaning and Arenla, the lead narrates and explains the untold stories from Nagaland. Comprising talented Naga musicians, Abiogenesis mines the essence of oral narratives passed down through generations. In a time where western story telling is dominant, Abiogenesis retells Naga folklores. Their act is not only entertaining but also a learning experience.

The term ‘Abiogenesis’ means to reactivate dead cells and the evolution of life from lifeless matter. During the early 90s northeast was crippled by drug exploitation by youth. Abiogenesis wanted to preserve the tribal ethos and rescue such youth through their soulful music. The youth are more inclined towards western music and Abiogenesis wanted to bridge a gap between modern music and Naga folklores. Initially a rock band, Abiogenesis was assigned to create an album on HIV by Nagaland State AIDS Control Society (NSACS) in 2002. This was followed by a feature film (‘Big Time Buddies’) on the same issue, which was written and directed by Arenla in 2003. They were also assigned to create an album for health awareness by the State Department of Health and Family Welfare in 2004.

The journey of innovation: Creating revolutionary music became a trademark of Abiogenesis. With time as their music matured, they realized the need to move forward. This made them explore and experiment with their music. A new form of music bloomed from their experimentation called Howey. Forming a new genre of music, Abiogenesis became the first Naga Folk Fusion Band and Howey music became their signature identity.

The word Howey signifies solidarity. The term is a historical form of expression that is used to relieve exertion during work. To enhance team work, ‘Howey’ is chanted that provides energy and is healing. The chant ‘Howey’ is also uttered during folk dances at local festivals. Commonly uttered chant, ‘Howey’ unifies all Naga tribes and acts as a bonding force which brings different tribes together. For Abiogenesis Howey became a blend of Naga folklore and folk tunes married to various forms of western music. The Howey genre was largely appreciated as it boosts the cultural wealth of Nagaland.

In 2005, Arenla was appointed as Guru by North East Zone Cultural Centre, Ministry of Culture, Government of India to impart the knowledge of Howey music. She staged two Howey Musicals titled ‘Lichaba’s Daughter’ and ‘Sojourn of the Ahom Prince in Naga Hills’. Arenla directed and was involved in the playwright. The feature films were stitched together by old Naga stories that Arenla recalled were told to her by her grandmother. The film showcases the rich history of Naga culture. Their album ‘Aeon Spell’ released by Saregama India Ltd. was listed for nominations in the 50th Grammy Awards under the category of Contemporary World Music. Being a vocalist, Arenla faced problems while making music, the traditional instruments were beat or percussion based, playing various notes was not possible to suit her style and genre of singing. Moa made the BamHum to help her wife in 2005. He could develop this musical instrument within a year.

The musical instrument is hand made by Moa Subong. The bamboo used for making the BamHum is the one used for fencing, as it is sturdy and durable. Bamboo piece with a node (closed internal partition) at one side is taken and treated over heat for 10-15 minutes or more. There is a rattle at one end of the instrument (for amplifying notes) and a hole in the bamboo node (closed internal partition) for passing of the air at the opposite end. It has only one opening (hole) through which the user has to hum, which then gets musically amplified through the instrument. The user can moderate the tone of his/her to get desired musical notes and pitch from the instrument, which takes some practice. Thus effectively, the range and tone of the user becomes the tone and range of BamHum, which makes it so versatile.

The simplicity of playing the BamHum is an added advantage, since all it takes for the player is to simply hum any tune. Unlike other instruments where one is required to undertaken formal lessons to master the technicalities, the BamHum only requires controlled breathing and practice to acquire proficiency. It can be played as a solo instrument, as a backup or as supportive role in a band/orchestra or played in an ensemble with multiple BamHum players playing various parts of a routine. The BamHum can be a part of various kinds of music be it classical, folk, rock, jazz, blues, pop, gospel etc.

The Music Task Force of Government of Nagaland opines that “the resulting sound that emanates through the rattles has a buzz like effect that melds with the tonal notes hummed into the instrument m which gives its unique ‘mixed’ sound. This mixed sound cannot be duplicated vocally and hence it deserves its space as an ‘instrument’ that helps broaden the vocal capabilities as alternative accompaniment in melodies.”  Moa Subong has sold over 5000 BamHums in the last ten years. Music bands like Parikrama and singers like Papun have also purchased the instrument. The couple has performed widely in India and abroad and their performance has been much appreciated.

Insatiable by nature, Moa Subong never stops experimenting with musical instruments. He has invented a new Bamboo percussion instrument called Tikzik. Tikzik is played by holding it with one hand and striking it with the other hand. The fingers can also simultaneously tap single notes and repeated beats on the Tikzik stick or the small tok pad on one end of the Tikzik, and the zik sound can be produced with an additional stick, while the shaking sound is also heard. According to Moa Tikzik can be classified as un-pitched percussion instrument, which produces notes without an identifiable pitch.

Moa Subong considers their band as representatives of the Naga Culture. Their genre along with his innovations stems from their rich culture. Northeast is often looked at as an untamable region or a conflict ridden area, what goes missing is the myriad culture worth showcasing. Through Howey music Abiogenesis tries to sketch the image of Northeast with colors where communities live in harmony where the modernity is welcomed and what is indigenous is celebrated. According to Moa, culture can be a great way to represent social causes. Through their music, they wish to promote social betterment as well as aid people in need.