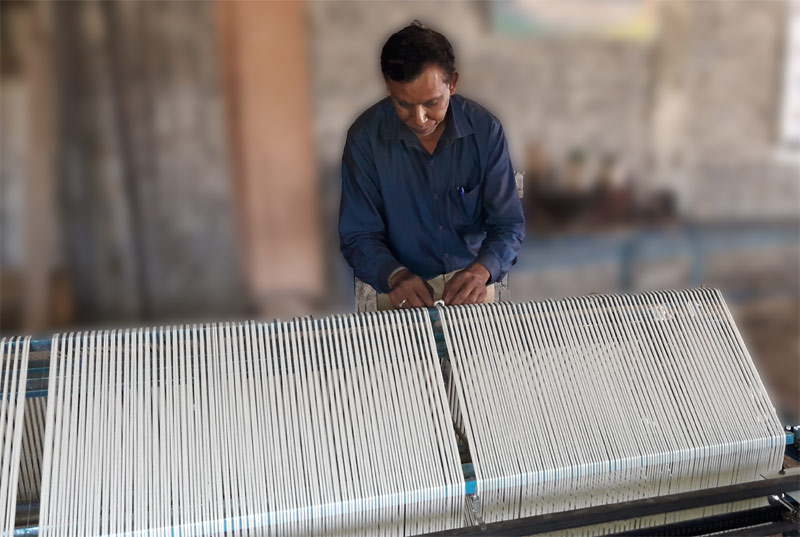 PrafullaMeher (56) is a weaver and textile machine manufacturer. He left his studies due to a financial crisis and joined his family business of weaving SambalpuriSarees. He visited numerous NGOs for gathering knowledge about weaving and started his own workshop named Artisan’s workshop in the year 2008.

Weaving a 6 feet saree requires 8 kg of cotton and three processes viz.spinning, winding and threading are involved. Spinning is done for the purpose of dying and making designs in sarees, and winding is done to make a suitable package for both woven and knitted fabric production. He used to engage labourers for winding of the cotton thread. This process required two tree trunks for winding operation. However, gradually the number of labours decreased due to the involvement of tedious work in manual winding, lesser wages and better opportunities. Prafulla then started working at designing a solutionfor mechanization of this processes and nearly after 6 months hewas able to develop his first prototype, which is a self-propelled machine that facilitates winding of cotton thread for weaving of sarees.

The drum receives power directly from a 0.25hp electric motor and this can be operated manually as well. Weft winding work is carried out over the entire length of the drum. Prafullahas developed Purra bed(uniform thread distribution system), which automatically changes its direction of movement. This Purra bed has two cycle hubs for easy movement over the frame track. There is a small vertically placed thin rod attached with the chain loopand Purra bed is placed over this rod. So when it makes a U-turn after completing half cycle, the Purra bed automatically changes its direction of motion. The secondPurra bed travels on other end of this drum as both Purra beds are connected by means of a square pipe. In this way, both the thread distribution systems work automatically and help in improvingproductivity. The machine has the capacity of winding 10 bundles of yarn over the drum within an hour.The machine costs Rs. 25000/- and over 110 units have been sold till date.