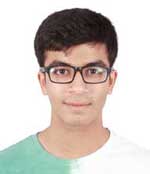 Janmejay has to cross a slum area every day in order to reach his school. Every day, he used to watch people live in cramped spaces in the overcrowded slum and whenever a child fell ill, the slum dwellers would take the child to a temple instead of the hospital. This set off his innovative mindto come up with an idea of a colour-coded thermometer, which not onlygives out the temperature red for emergency, orange for intermediate temperature and green for normal but also gives out precautionary measuresand even dials an ambulance in case of an emergency! The thermometer also has a speaker that can read out the temperature through a voice message for those who are partially or completely visually challenged.

"This is not limited to only humans but can also be used for dairy and poultry animals. I am also working on connecting the thermometer from the nerves under the tongue to the cardiac nerves to know about the heart condition," says Janmejay, who loves physics and has made many theories that try to disprove contemporary theories.

When he grows up, Janmejay wants to become a scientist as well as an entrepreneur. He is the captain of the basketball team in school and plays tennis in his free time.He dreams of affordable healthcare for all Indians.