Thirumali - an improved variety of cardamom

Thirumali - an improved variety of cardamom 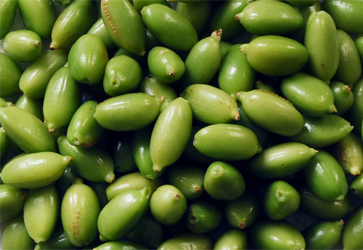 T.P. Joseph, a well known farmer for his innovative experiment in cardamom and pepper, has developed “Thiruthali”, an improved variety of cardamom. This variety is a prolific yielder with the dry yield being 4-6kg per plant. The capsules are parrot green coloured which fetch good market price. This variety is also resistant to root grub, stem borer and instance of decaying.  For Joseph agriculture has been a passion since childhood. Though he was good in studies, poor economic condition of his family forced him to discontinue studies after secondary education. He recalls some of his school friends, who continued their studies, went on to become famous doctors. Nevertheless, he is content of the life he has lived and appreciation he has received for his experiments in agriculture. He believes that observation, hard work and determination are the most important qualities of an innovator. The life of seventy four year old Joseph underlines these values.  Hailing from Kottayam originally, their traditional agricultural family migrated to Mariapuram in the hilly terrain of Idukki in 1964. Initially they were into the cultivation of paddy, tapioca and pepper. But later after purchasing few acres of land, they started cardamom cultivation in Peethothy area of Idukki district. Like any other farmer family in Idukki, they also struggled a lot to ward off attacks from wild animals and to get acclimatised. In 1980 he decided to only focus on pepper and cardamom cultivation. But the pepper cultivation got destroyed fully by quick wilt and this forced him to confine his interest to cardamom cultivation alone. He started cultivating most popular variety Njallani and other local varieties. His family includes his wife, three sons and a daughter. The two elder sons are helping him in agriculture while the youngest one is a practicing advocate in a

distant city. Joseph, who stays with his second son, mentions that his wife and children are behind all his achievements.

The area where Joseph lives gets covered with heavy mist particularly during rainy and winter seasons. Joseph observed that even Njallani, the most popular variety of cardamom was not performing well in his place. He then tried many other varieties but without success. He also realised that many high yielding cardamom varieties were highly prone to diseases and pests, which drastically reduced the yield at times. This prompted him to think about developing a variety, which would suit local conditions.

In 2000 he selected the high yielding variety Njallani and other two varities named Vazhukka and Vulga (Malabar Variety). Though low in yield, both Vulga and Vazhukka were known for less maintenance as well as high resistance to pest and disease. These three varieties were planted in a pit with an isolation distance of 5m to reduce the chances for cross pollination. After two years capsules were harvested from these plants and 600 seedlings were raised through seed propagation. These seedlings were then transplanted in an acre of land.

When the plants grew, he noticed a special plant with profuse flowering and long panicles (6 feet long) with an average of 4 pinnacles per tiller. It displayed resistance to disease and pests as well. From this mother plant, 30 seedlings were developed and planted. Another 20 seedlings were then developed from each plant. Of these 600 plants, 500 are still growing well in his field in their twelfth year. High yield, good resistance to pests and diseases are the particular features of this variety. It took him six years to stabilize the yield characters of this variety. Presently, he receives a minimum of about 4-6kg of dried cardamom per plant. He says this yield is unique and high among the existing popular varieties. He has been multiplying the variety by vegetative propagation. This has been widely adopted by other cardamom cultivators as well.

It is a Malabar type variety with a dry yield of 4-6kg per plant and is highly suitable to Santhampara area of Idukki district, Kerala. It gives good yield even under rain fed condition and is mostly suited for areas with less shade (<40%). The medium bold and parrot green coloured capsules fetch good market price. In this variety about 60 - 80 productive tillers per clump, 50- 60 racemes per panicle and 15- 20 capsules per racemes can be observed. Due to the higher number of panicles per tiller, the yield level in the first bearing itself is two to four times higher in comparison with other popular and released varieties. The plant has fibrous stem and is resistant to stem borers, root grubs and incidence of decaying. The management efforts as well as the pesticide and fertilizer requirements are also less than other locally popular varieties.

Indian Institute of Spices Research, Calicut and Indian Cardamom Research Institute, Idukki have both observed that this variety has a higher yield than other locally popular and released varieties. IISR, Calicut, while claiming it to be an innovation, recommended recognition for the farmer. Bapooji Krishi Vigyan Kendra Santhanpara, Idukki describes this variety to have a yield potential of 2000-3000 kg/acre (dry weight) with 22% curing weight.

Joseph maintains a nursery of the plants for sale/distribution to other farmers. This variety has slowly spread to many districts of Kerala and neighbouring states of Karnataka and Tamil Nadu. The farmers mention that this variety gives good yield and performs well even under adverse conditions while reducing the overall cost of production by 40 per cent. He claims to have sold more than 2 lakh seedlings to about 1000 farmers in over 2000 acres of land. Joseph mentions that mostly small and medium farmers cultivate his cardamom variety because it requires little inputs. He adds that most of such farmers actually grow cardamom because of this particular variety; else they may have switched over to some other crop. Apart from economic benefit, which he may obtain through the sales, Joseph is happy to see the change in the lives of small farmers. Cherukida karshakarude jeevithathil ee vilavu kondu vanna matta kanumbol njan valareyathikam santhoshavananu, says Joseph. (I am satisfied by seeing the success of small and medium farmers cultivating this variety which has brought change in their life).

Thiruthali variety was recognized in First Farmer Science Congress at Kannur Krishi Vignan Kendra some time back. Joseph also received a certificate of honour from All India Radio for adopting the modern agricultural techniques and Prasar Bharati award from Doordarshan in 2009. A documentary on his variety was also aired in Krishi Darshan programme by Doordarshan Kendra. He also bagged Bapooji Krishi Vigyan Kendra’s best farmer award of Idukki district in 2009-10. “Cardamom landrace Thiruthali is an innovation of high esteems for consideration by any institution for a moderate farmer” mentions the KVK.

Joseph, still experimenting, is working on developing another variety – the ‘super Thiruthali’ with bold capsules, high productivity and adaption to local conditions. Though he is largely satisfied with what he has achieved in his life, there is a worry that troubles him a lot. While he wants to transfer all his accumulated knowledge to the next generation, not many are interest to receive any. He is sad about the fact that while the whole world is dependent on agriculture yet farmers and agriculture are not getting the attention that is due to them.  He wishes for a time when farmers’ contribution would be recognised. Joseph opines that agriculture needs to be included in school curriculum so that students get sensitised to it and may get interested to take it up as a career later.