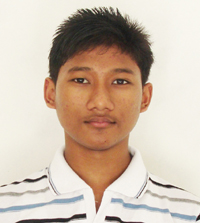 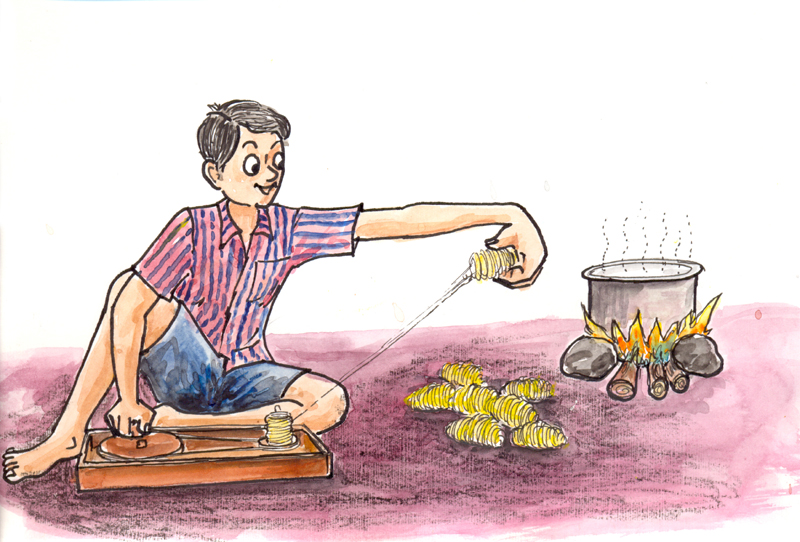 Kaushik belongs to Assam.  It is known for its bright, golden-coloured Muga silk that is only found here.  Like many others in the area, Kaushik’s family rears silkworms. As a child, Kaushik was fascinated while watching his family carry-out the complex process of obtaining silk.

How is silk obtained?

The silkworm spins a protective covering, or cocoon, using silk filaments.  The unwinding of these filaments is called reeling.  The cocoons are first boiled to soften them and are then lightly brushed to find the ends of the filaments so they can be unwound.  Since filaments from a single cocoon are thin, five to ten cocoons are reeled simultaneously to obtain a single, strong and continuous silk thread.

Inspiration from problems faced by family

Kaushik’s family and others in the area used these cut and pierced cocoons to make inferior quality gicha yarn.  This yarn got a quarter of the price fetched by the reeled yarn.  Kaushik found it disturbing “because it is the same raw material, but the value has gone down”.

He shares, “Although my family has been cultivating silk worms since many generations, no one knew how to best utilize the cut and pierced cocoons.”

This inspired him to find out a way to get continuous silk filaments from these cocoons.  His father and uncles helped him along the way.

His idea helps in obtaining half of the silk from cut and pierced cocoons, and the rest is used to make gicha yarn.

He worked out a system to draw silk fibre from these cut and pierced cocoons either through a dry method or by using a cooking medium.   He has further innovated this by converting good, reeling cocoons into bobcoon, or a bobbin cocoon, which helps in collection of a continuous silk filament.  These bobcoons have a tremendous advantage of getting a continuous silk filament of uniform size and thickness that can be stored over a long period of time.

His parents were very proud when he received an award “as it was for the first time that anyone from this area had won an award like this, and it has the potential to help many families who do this work,” he says proudly.

The local media covered him extensively and he was also honoured by the community.

Kaushik is interested in agriculture.  He attended a seminar on alternatives to pesticides, and is now working on his next project: the possibility of using a certain type of larvae-eating wasp to protect crop from pests.

Fond of playing football, Kaushik gets inspired by his teachers who go beyond regular school lessons to motivate students to do their best. He is interested in the field of biotechnology and hopes to make his career in it.

Note: Kaushik received the IGNITE 2010 award.  He created a prototype based on his idea and a patent application (1244/KOL/2010) has been filed by NIF in his name.  He also featured in Teenovation, a program on child innovators identified with NIF’s help.  It is aired on Zee Q channel.