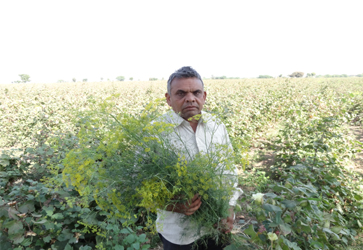 Farmers by profession, Bhikhabhai Becharbhai Suthariya from Bhavnagar and Ahmadbhai Daudbhai Ganchi from Bharuch have been using non-expensive solution for pest control in crops using suva, a winter crop having insect repelling odour.

Owning about eight bighas of land, Bhikabhai mostly grows cotton in his field. His family comprises of five members- wife, two son and two daughters who have always supported him to carry on with his agricultural experiments. Apart from his farm work, he likes travelling and claims to have travelled across the length and breadth of the country. On being asked the reason for developing a cost effective method of pest control in cotton he remarked, “Mari passe dimag hattu, pan abhyas na hatto” (I have good knowledge but not practice).

In 2006, he sowed Bt cotton with some space between the two consecutive rows. To make optimum use of the space, he decided to sow suva in between the cotton rows. The same year he observed the incidence of sucking pests in other farmers’ fields while his own field was free from the pest. Since then he has been using this practice to protect his crop from sucking pest. Given the results about a quarter of the farmers of his village have started using this practice, which reduces the dependence on chemical pesticides.

Ahmadbhai owns four acres where he grows castor, cotton, millets and wheat. His family comprises of his wife, two sons and a daughter. The whole family believes in using low cost herbal formulations for agricultural use. In the practice used by Ahmadbhai, seeds of suva are incorporated with sorghum seeds approximately 3 to 4 kg/ha at the time of sowing to avoid the emergence of striga. Suva has very slow growth. Its growth is suppressed at later stages due to shortage of light, water and nutrients. Hence there is no detrimental effect on the growth of sorghum.