Price :   Rs 38,000/- The price includes packaging cost but transportation cost shall be charged as actual. 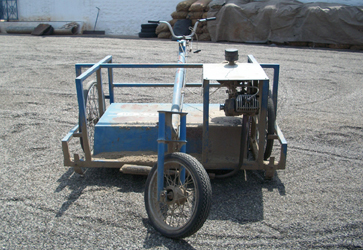 R. Ravi (37), a mechanic from Erode has developed an engine operated paddy spreader for fast and efficient spread of paddy. This machine can also be used to spread oil seeds, millets, coriander etc.

Studying only up to class eight, Ravi worked as an electrician for five years and then as a mechanic and labourer for about a year in a local firm. Thereafter he started his own workshop. While visiting mills for supplying products and repairing machines, Ravi observed the difficulty in spreading hot parboiled grains (seeds) and also the labour requirement. Paddy is generally spread on the floor and exposed to sun for drying. A large number of workers are needed frequently (7-8 times a day) for turning the paddy rapidly for proper and uniform drying. For best results, the thickness of paddy layer should be about 2.5 cm. At this thickness, an acre of drying floor can handle 60 tons of paddy. To solve this problem, Ravi devised this machine and gave it to the labourers for their feedback, which was used subsequently to make improvements.

His spreader is a tricycle having a 50 cc petrol engine, which powers rotary members made of rubber and mounted on a shaft. These rotary members turn the grains (seeds) without damaging. As an innovative solution for sun-drying the paddy and oil grains, the machine appears to be very useful for farmers and small scale industries. Spreading 10 tons of paddy using this machine just needs two labourers for which otherwise 15 labourers are needed. The machine costs Rs 30,000/- and Ravi has sold about 200 machines in Tamil Nadu. In 2008-09 after about 3 years of sales, he stopped developing this machine further due to the funding problems. Many tried to copy this machine but somehow could not succeed.

Generally, parboiled paddy and oil seeds are spread on floor for sun drying. A large number of workers are needed for turning these frequently. Ravi observed the problems faced by the workers and developed an engine operated paddy turner having rotary tyres with rubber coating.

The innovator has developed an engine operated tricycle spreader. The power from engine is utilized to rotate rotary members made of rubber and mounted on a shaft. The rotary members turn the seeds without damaging. It spreads parboiled paddy fast and uniformly.