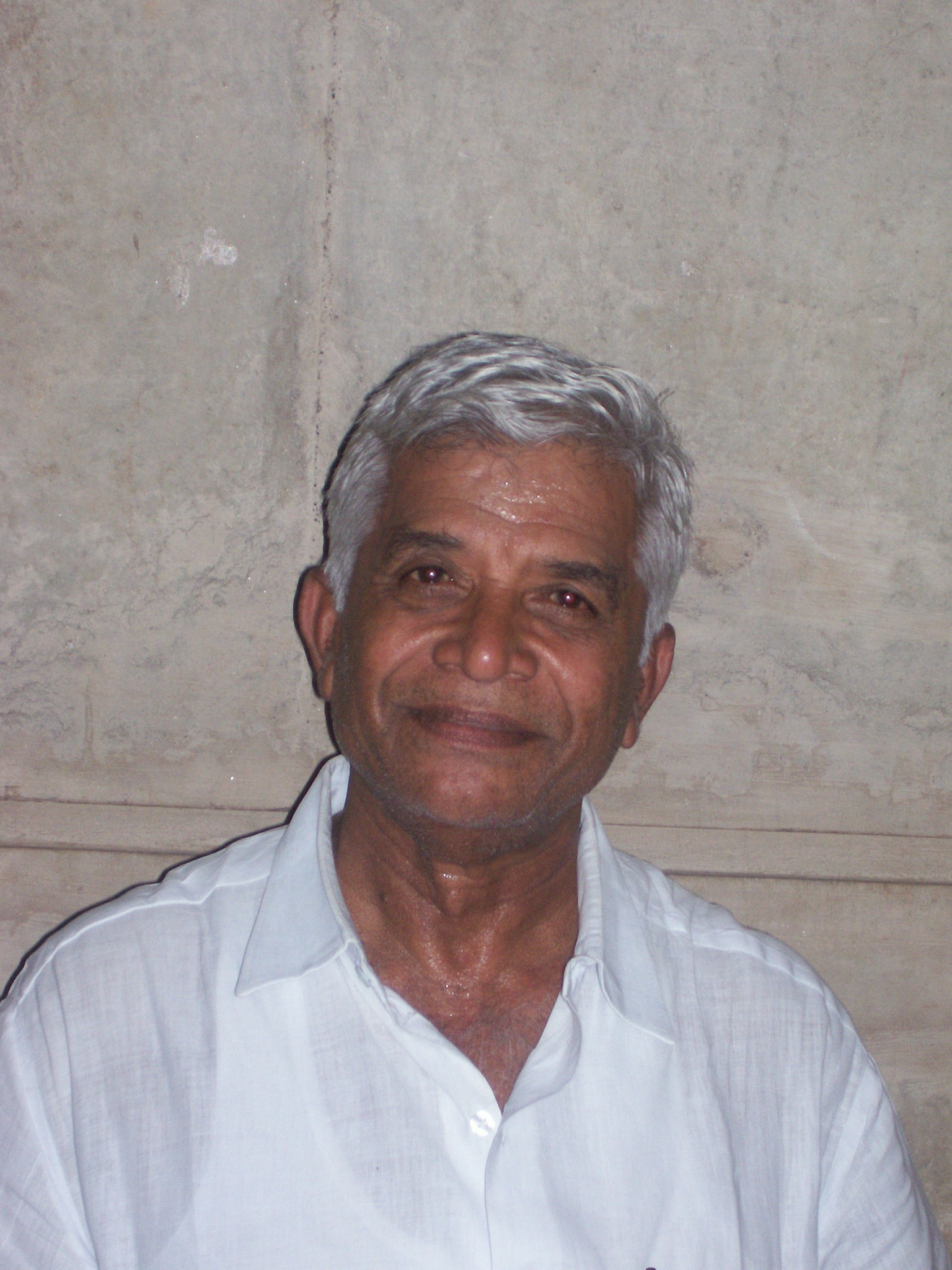 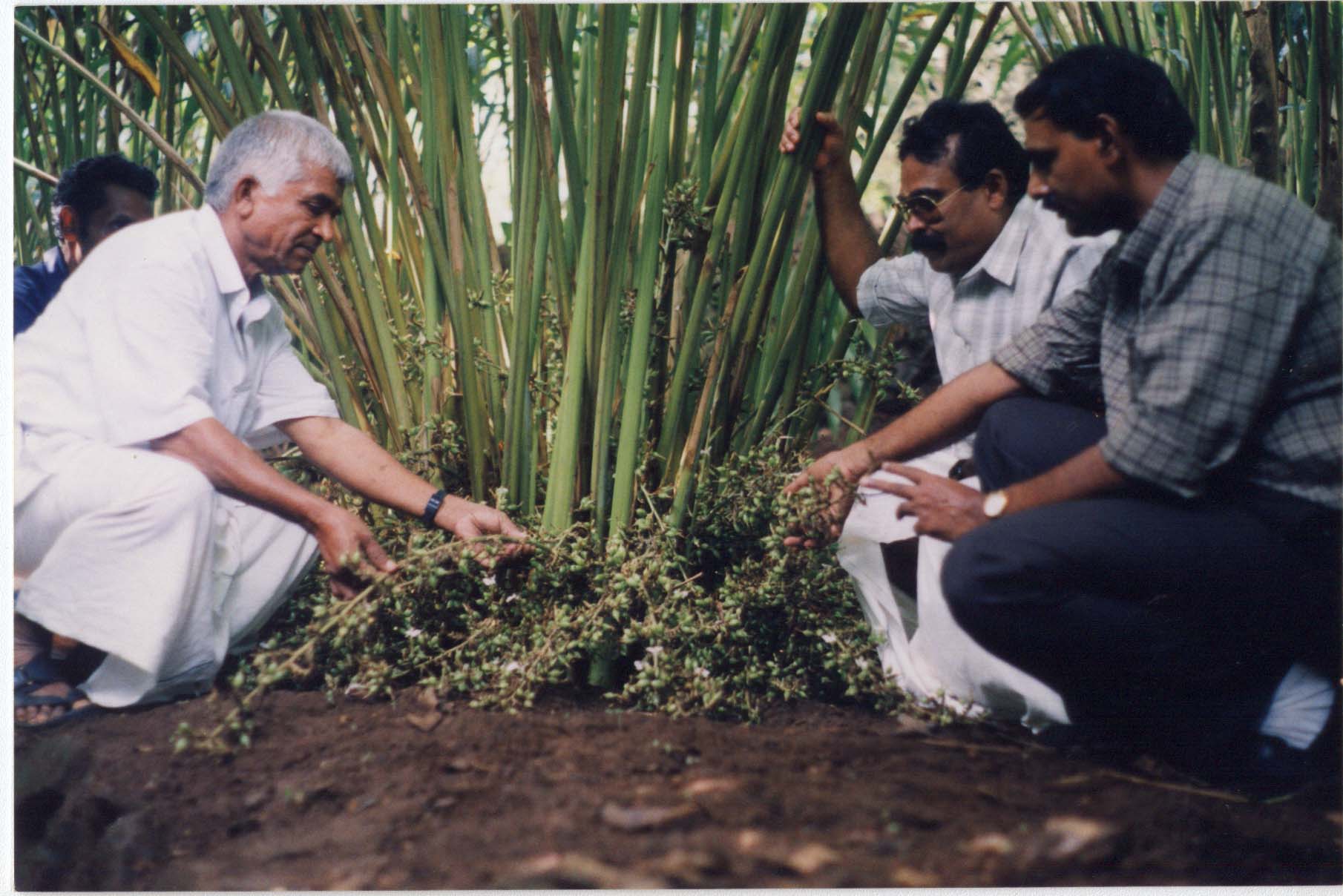 Surulivel (70), a progressive farmer, has developed and propagated a variety of cardamom having the qualities of high productivity, large sized capsules and high growth rate. His family comprises his wife, son and two daughters. He has been cultivating cardamom and coconut on the 30 acres of land he has in Kerala for the past 40 years.With plans to start cultivation, he bought a piece of dry rocky land in 1969. The land was mostly covered by weeds like Pterolobium hexapetalum and Lantana camara and was not suitable for cultivation. Toiling hard, he moved the big rocks and used them for building rock bunds, which were incorporated with native soil, cow dung and dried leaves. This prevented soil erosion and improved its fertility. As he found the land suitable for cardamom cultivation, he planted many varieties in it.Since cardamom plants require more shade, he planted Artocarpus heterophyllus (Jackfruit1 ) trees between the cardamom saplings.
Genesis
In late sixties, SuruIivel started cultivating cardamom (Mysore type) on his farm. Then in 1986, he came across some other varieties, which grew well in both drought and water logged conditions.His wife who has been quite observant pointed out two plants that outperformed others in the field. He noted the quantitative and qualitative traits of these plants such as growth, yield, and resistance to pests, diseases and abiotic stress viz. drought tolerance, water logging, aroma, oil content, etc. over the next five years.  A senior scientist of Indian Cardamom Research Institute, visited his field, appreciated his efforts and encouraged him to mass-multiply these two plants by adopting propagation techniques. The words of appreciation from an expert egged him and he started preparing clones of the plants to use them as planting material in his own estate. He isolated planted this variety in one acre of land in 1991. He multiplied the selected lines by vegetative propagation. The planting 3 x 3 x 2 feet pits were filled with lime powder, compost and topsoil. The split suckers were planted in pits and protected from wind by supporting the plants with stakes. Dried leaves were used for mulching to prevent soil erosion and to conserve soil moisture. Then organic manure was applied at three months interval.Five years later in 1996, the plants started yielding. He named the variety as ?PNS- Vaigai?, PNS standing for his name (P.N.Surulivelu) and Vaigai, which is the name of the river flowing nearby in the Cumbum valley.
Innovation
The PNS- Vaigai seed size is large compared to the local variety Njallani. The yield is higher and consistent: 900-1400 kg/acre from 1996 till date. The number of internodes (average 40-45) is higher than in the locally popular varieties. The rhizomes are bigger, bolder bearing 3-4 inflorescences each, which in turn bear around 25-32 racemes each. The rind (skin of capsule) is thin and hence the recovery percentage is higher than Njallani. In addition, there is no difficulty in post harvesting. In fact, the driage recovery has been higher than in the local variety.   The market response for it has also been very encouraging and it has been commanding prices, at least 15-20 percent higher than other local varieties. Since 60-70 percent of the produce is 7 mm and above, the income from per unit of land is also higher than other local varieties. So far he has sold 2,50,000 sapling to many farmers of the region. Now most of the cardamom growers in his area have started growing PNS-Vaigai and a vast area under cardamom cultivation is covered by this variety alone.Apart from receiving public recognition at local level many times, Surulivel also won ICAR Spices Board?s (Kerala) first prize for achieving the highest productivity in cardamom (3250 kg of dried capsules/ha) during the year 2002-2003 by). High yielding planting material, maintenance of soil fertility through judicious application of organic manures and systematic soil and moisture conversation practices helped him in reaching the top position among cardamom growers. Given his vast experience and expertise in agriculture, he was invited to NIF?s informal Research Advisory Committee meeting in May 2006 to meet fellow innovators and also participate in the traditional food festival, Saatvik, organised by SRISTI-NIF in November 2006, where the response to his cardamom variety was overwhelming.