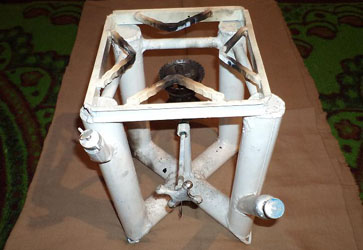 Ghulam Mohammad Sheikh (47) has designed a modified kerosene stove using pipes, arranged in such a way that there is no need of an additional fuel tank. It is believed that the stove has higher thermal efficiency due to preheating of kerosene (stored in the pipes) and less chances of explosion due to the distribution of pressure in large area.

Son of a labourer, Sheikh spent his childhood in extreme poverty and the financial condition has only marginally improved since then. While being unable to purchase a stove due to its cost, the idea to make it himself came to his mind. This low cost stove (Pat. App. No. 207/DEL/2012) is designed in a manner that the need for an additional fuel tank has been done away with as the pipes double up as the stand and the tank. As the kerosene is stored n the pipes, it is believed that the stove has a higher thermal efficiency due to preheating of kerosene. The chances of explosion are also less due to the distribution of pressure over large area.

Prior art search did not yield the description of any similar stove. However, the concept of preheating of kerosene before ignition has been tried by Niranjan Prasad Sharma from Uttar Pradesh. The development of an improved version of the stove was supported by NIF through GIAN cell (J&K), which also facilitated its testing at NIT, Srinagar. Apart from this modified stove, Ghulam Mohammad Sheikh is presently working on a motor bicycle, which can be used to ride over snow.